Dispel the Myth of Midlife! Be Spontaneous! 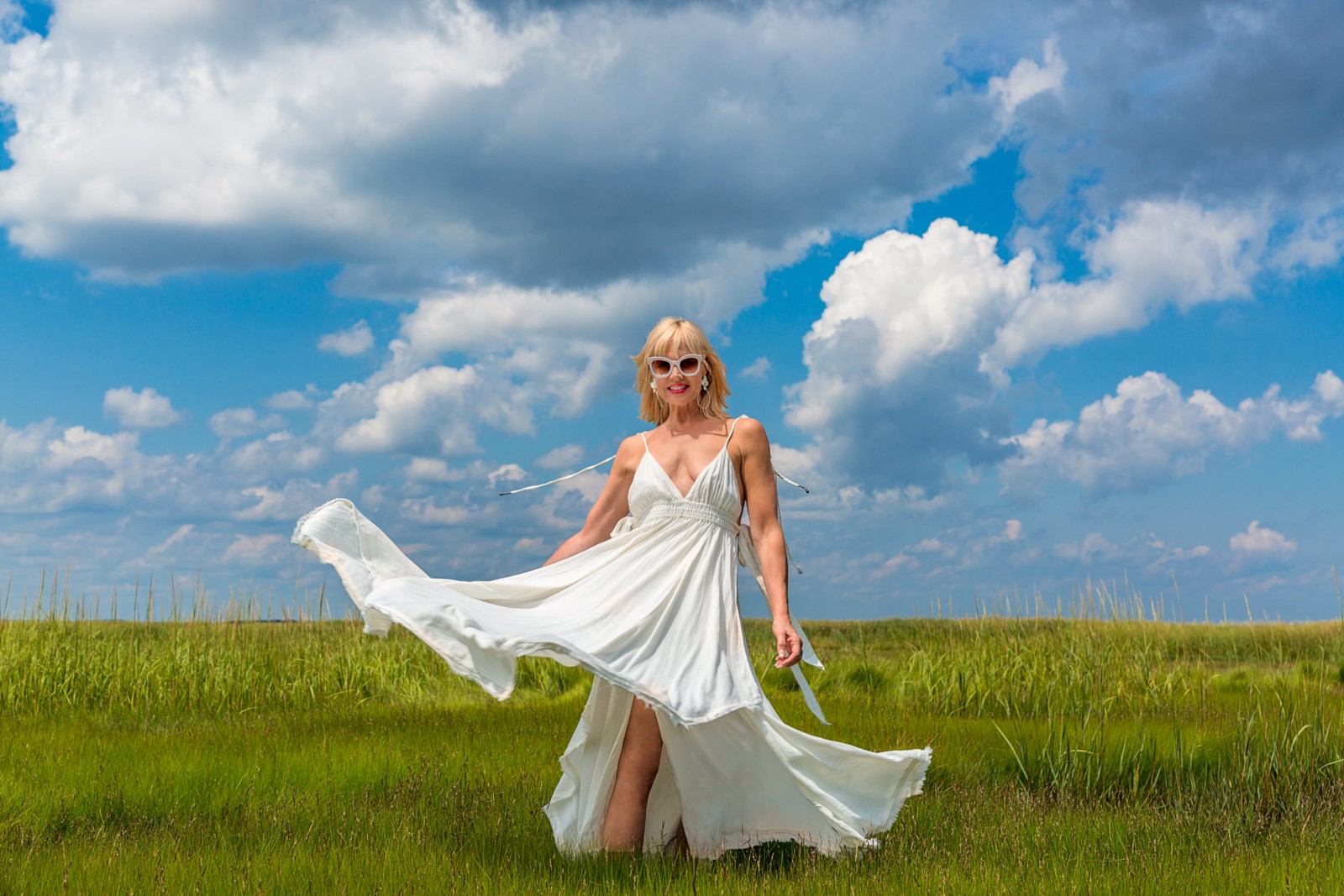 “Through spontaneity we are re-formed into ourselves.” – Viola Spolin

I would like to dispel a myth. There’s a perception of older women as being set in their ways and far from the spontaneous, vibrant, and fun loving women that we are today. By now, Y’all know I wear my heart on my sleeve. Life is messy. Life is complicated. Life is beautiful and the most beautiful moments are rarely planned. They simply happen. One of my greatest intentions in creating this blog wasn’t showcasing fashion but rather using fashion as a powerful medium to share a message of inspiration and hope. Fashion is fantasy. It’s a way to alter reality in an instant. I use it as a form of playful, creative, self-expression. Here’s the funny part…the truth is, most of my photo shoots aren’t planned out by an Editorial staff with a team of hair and makeup artists. Most are done quite spur of the moment. Much like the Wizard was unveiled by Dorothy…and frankly became much more real and loveable. I’m taking you behind the scenes of this shoot to show you how the magic really happens…and, more importantly, how you too can do it at any age!

While in Newburyport, MA, Alexander Thompson, the dashing General Manager of the incredible Essex Street Inn told me a story about a mansion like Pink House on Plum Island in the middle of a wetland called the Great Marsh. The story is that in 1925 a man and wife agreed to a bitterly contested divorce only when the wife demanded that she get an exact duplicate of their house built for her by her husband at his cost. She did not specify a location. So her husband built it where it would cause her the most unhappiness: far away from town in a march with no running water or electricity. And it sat there ever since … a dilapidated monument to spite! Having had a similar style divorce, I felt inclined to pay my respects!

So picture this: I’m driving down a two-lane highway surrounded by cornfields, marshland, and swampy green pastures on either side. There are rusty old buildings, rickety abandoned houses and swampland as far as the eye can see. I’m in a tiny rental car, jam-packed with suitcases with absolutely no intention of a photo shoot. My hair’s not done. My makeup – virtually nonexistent. And, I’m wearing an old t-shirt and yoga pants. In other words, I’m my everyday bohemian self and that alter ego you see in my images, CatherineGraceO has been carefully tucked away. In an instant, I tell my photog who’s driving to pull over as I see a photo shoot in the making. As usual, he tells me that I’m nuts…but does as he’s told and pulls over on the side of the dusty highway. I furiously toss on a sundress, grab a pair of sunglasses, throw on some earrings, and make a mad dash out of the car running through a very unglamorous and weed infested swamp land to strike a pose right in the middle of absolutely nowhere. 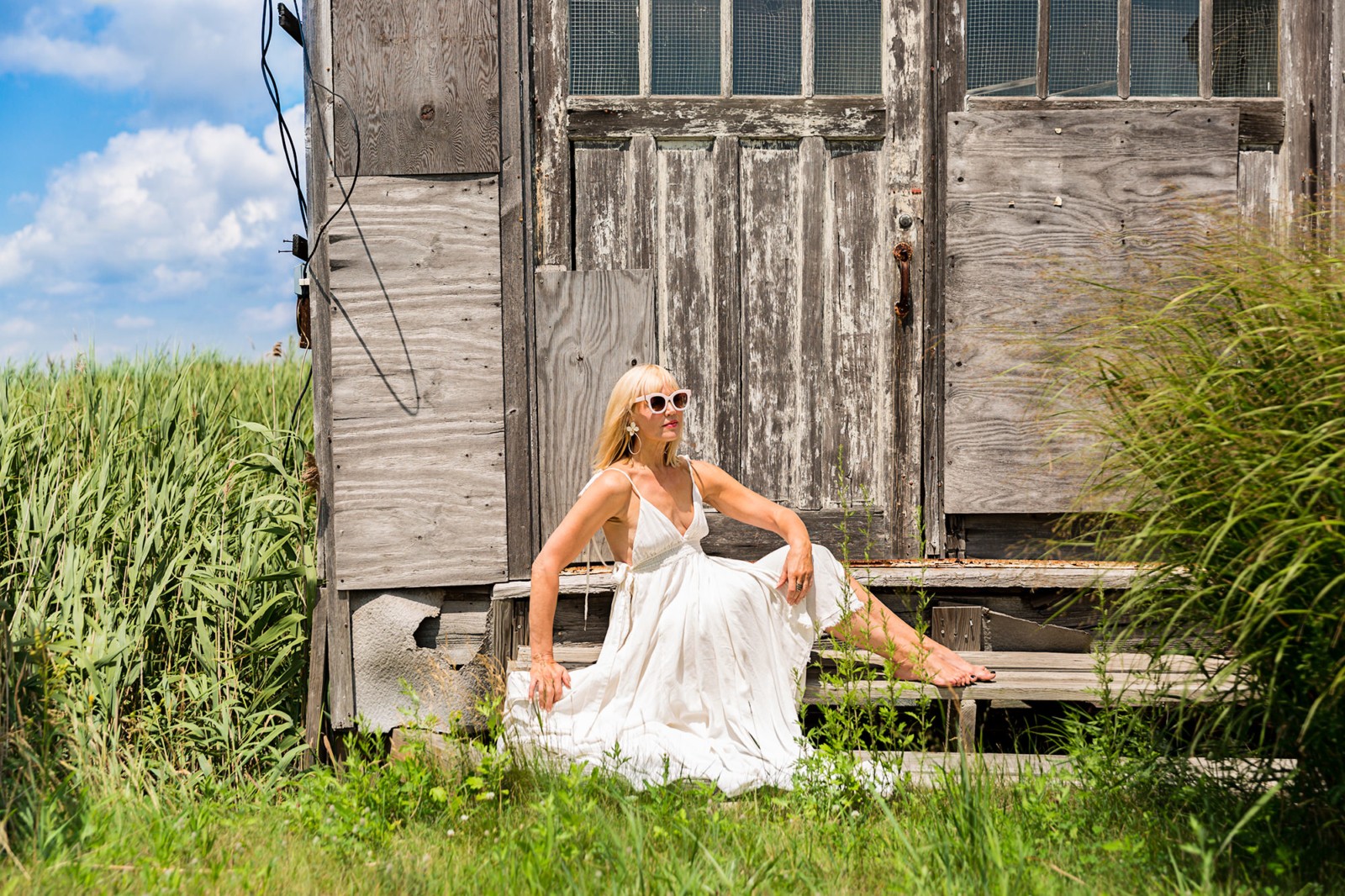 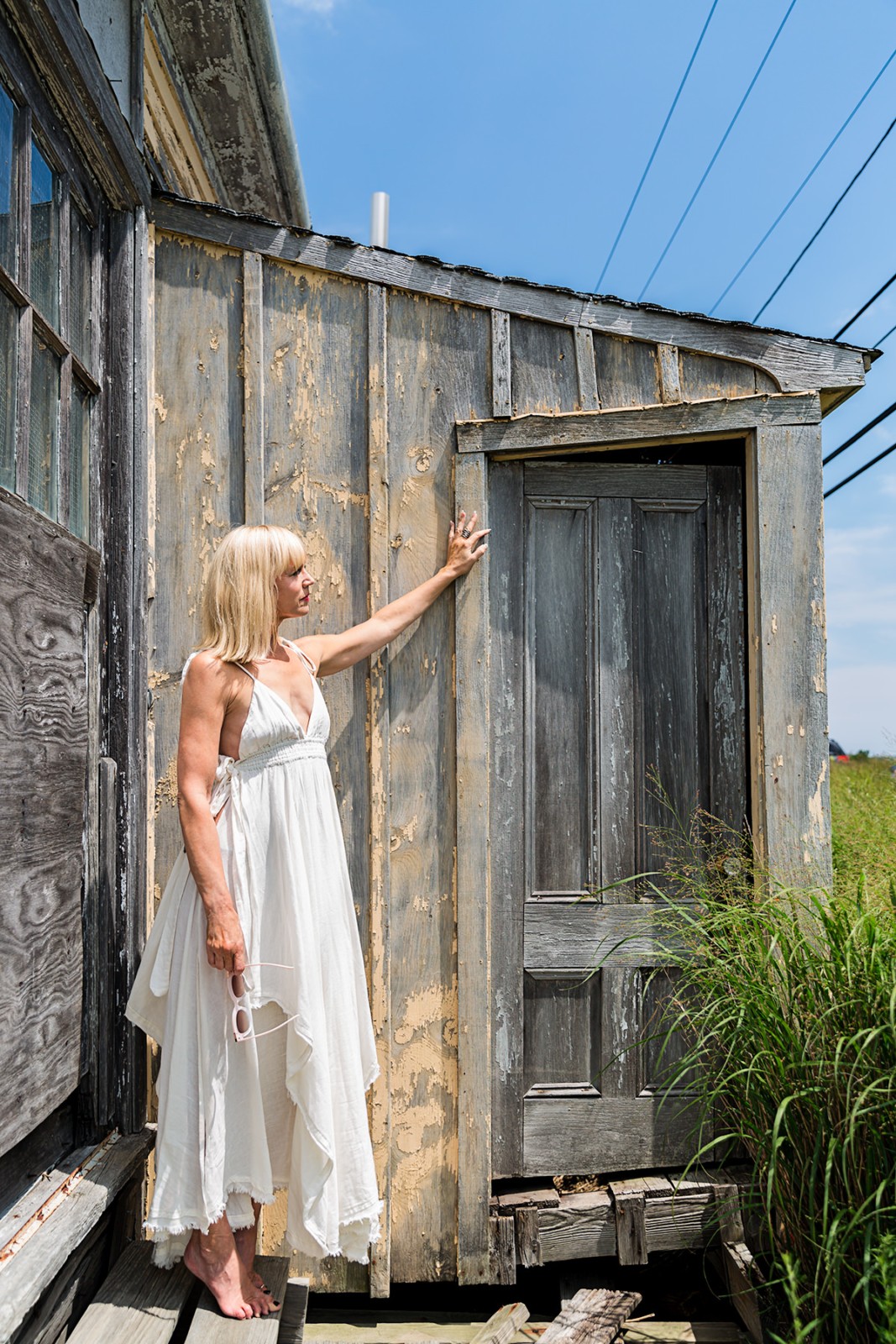 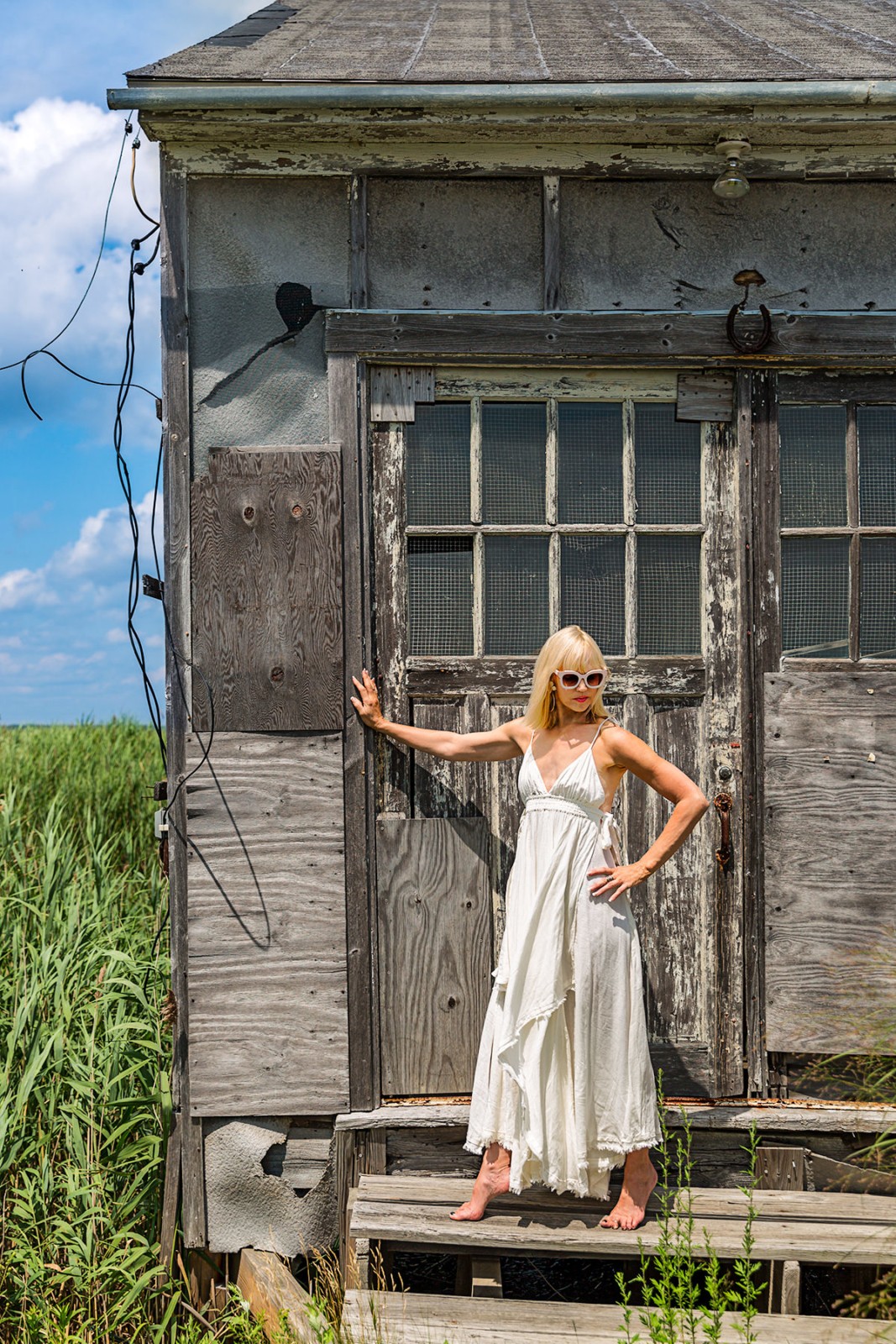 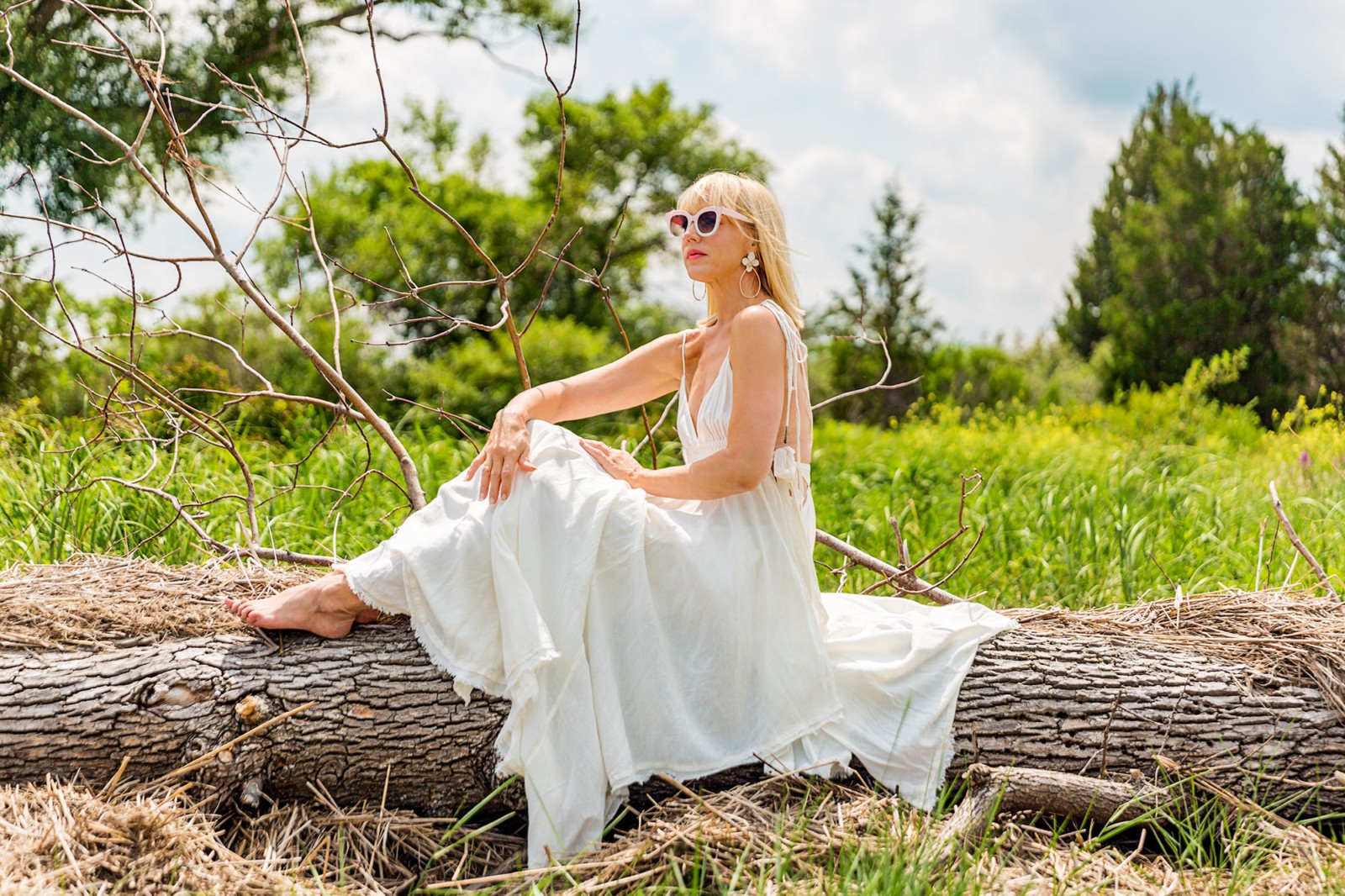 The chance of my doing that in my 20’s was about as close to zero as you could get. The beauty of a Midlife woman is there’s a joie de vivre, a realization that the time is now or never to make those dreams happen. Like Brene Brown says it so eloquently, “Midlife: when the Universe grabs your shoulders and tells you, ‘I’m not f@#cking around, use the gifts you were given.'” Those dreams can happen anywhere…even in the midst of a cornfield, swampland, or an abandoned building. Dreams don’t have to be big. Dreams can be anything that sparks joy, lights your fire and brings a smile or some whimsy into your life.

Photo shoots don’t have to be something grand. They can happen with no preparation….spontaneity brings with it an aliveness, a playfulness, an “I don’t give a “s**t!” attitude. Being Fierce isn’t about being aggressive. It’s just the opposite. Being Fierce is about a heartfelt intensity, an “all in” attitude on living life in all its messy glory. And, as you know, my life’s been a bit messy. I’m pretty sure, it’s meant to! And speaking of messy? Back to that swampland, my bare feet were covered in mud. That beautiful boho sundress…completely and utterly coated with a thick layer of dust and quickly turning into a lovely shade of grey. Did it stop me? Not for a minute! I happily hopped from one photo opp to the next…dashing from the cornfield to the rickety abandoned building. From the bug infested log to sopping wet in the midst of the swampy pasture. You may even notice the dress is slipping off…not exactly how the young Free People model would have worn it. Funny thing, there aren’t any mirrors in the midst of nowhere and I didn’t give a damn!

If I’ve learned anything by my 57 years on this planet, it’s that life must be grabbed by the horns and played full out. Before you know it, you’ll find yourself all grown up, wondering where the years went and how it all happened so fast. When you’re young, you play dress up and wish to be older. When you’re older, you wish your younger self was a bit wiser. You wish your younger self could live life backward to see that all those things that seemed so important, weren’t at all. And, all those moments spent stressing and worrying, rather than being present and enjoying what life had to offer were missed, never to be captured again. By Midlife, it’s the “middleness” that’s important. At least half of your life is gone and it’s up to you how you choose to live the remainder. Why not live it full out? Why not put the gas pedal to the floor? Why not be carefree and spontaneous? Why not…pull over by the side of the road and let your inhibitions go and allow that inner child to roam free. Life is messy. Life is beautiful. Life is Life. Live it. Cheers, Beauties! 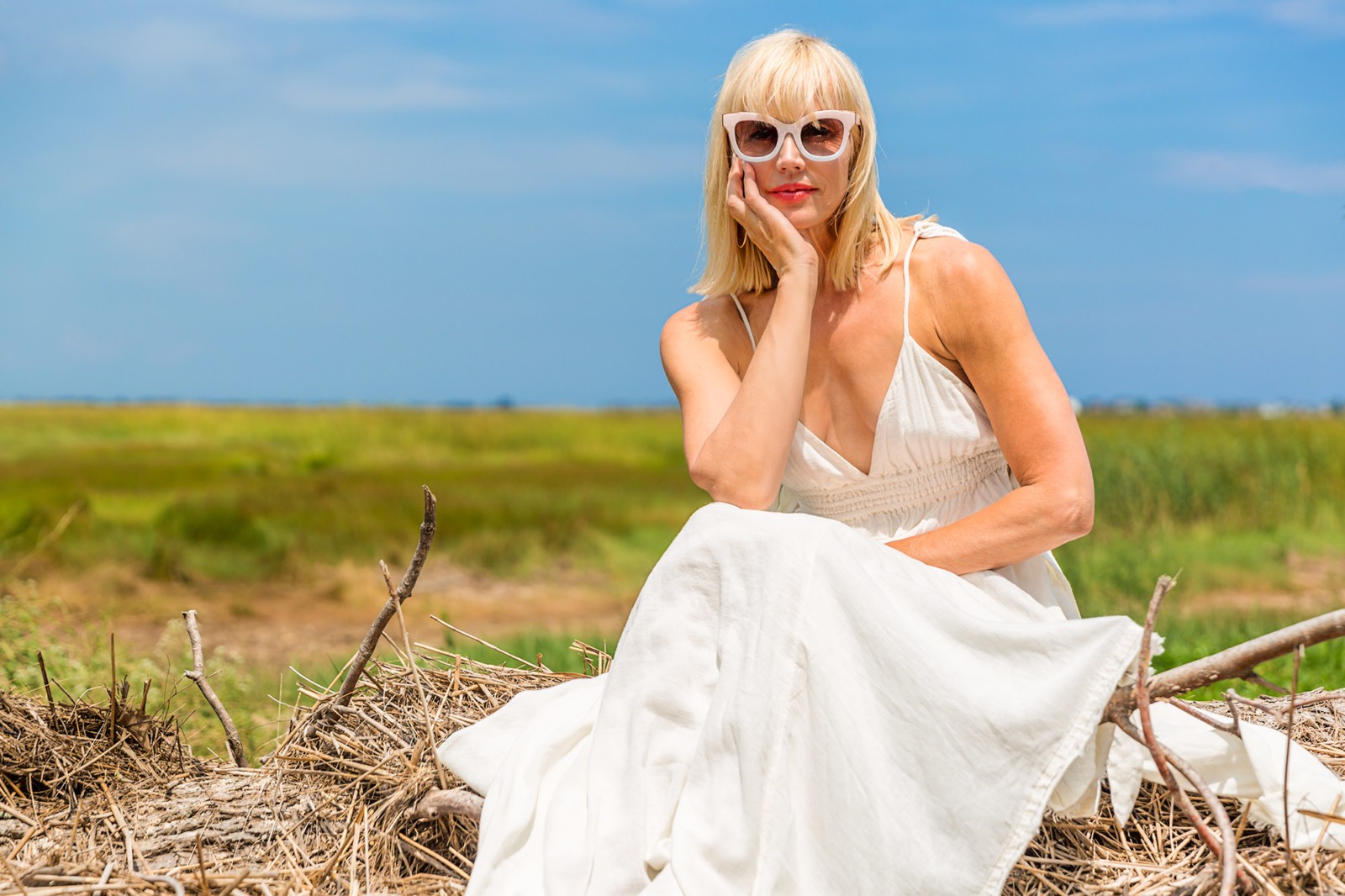 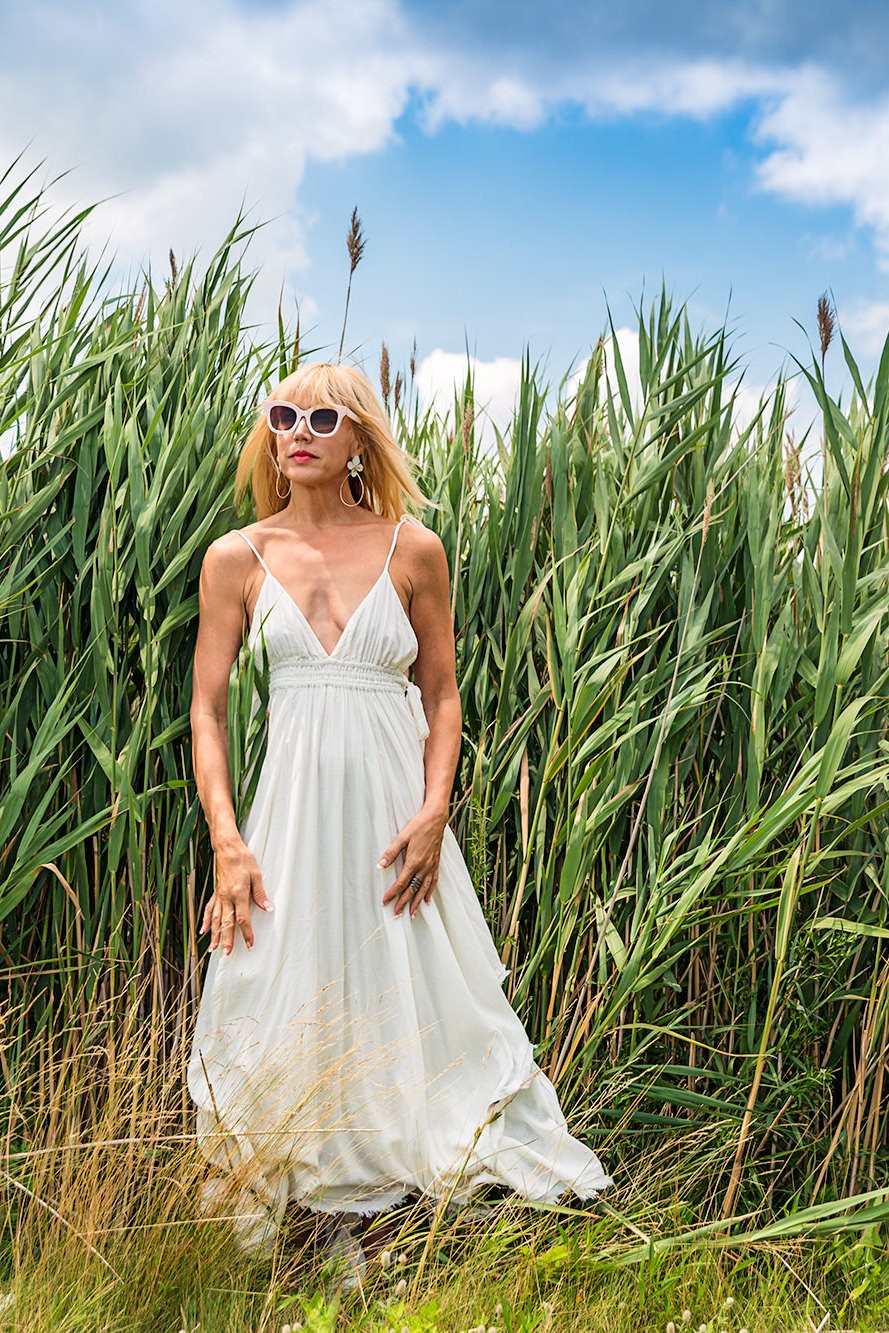 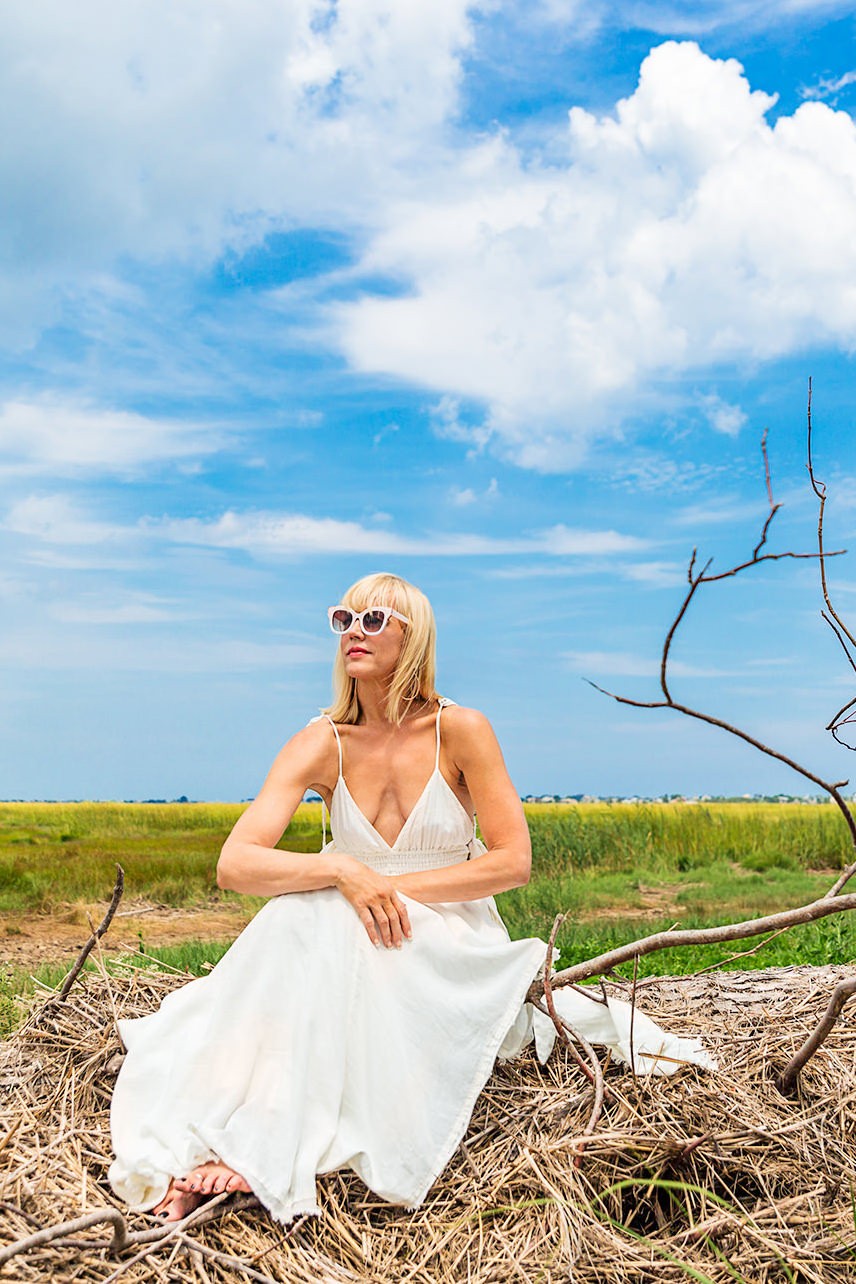 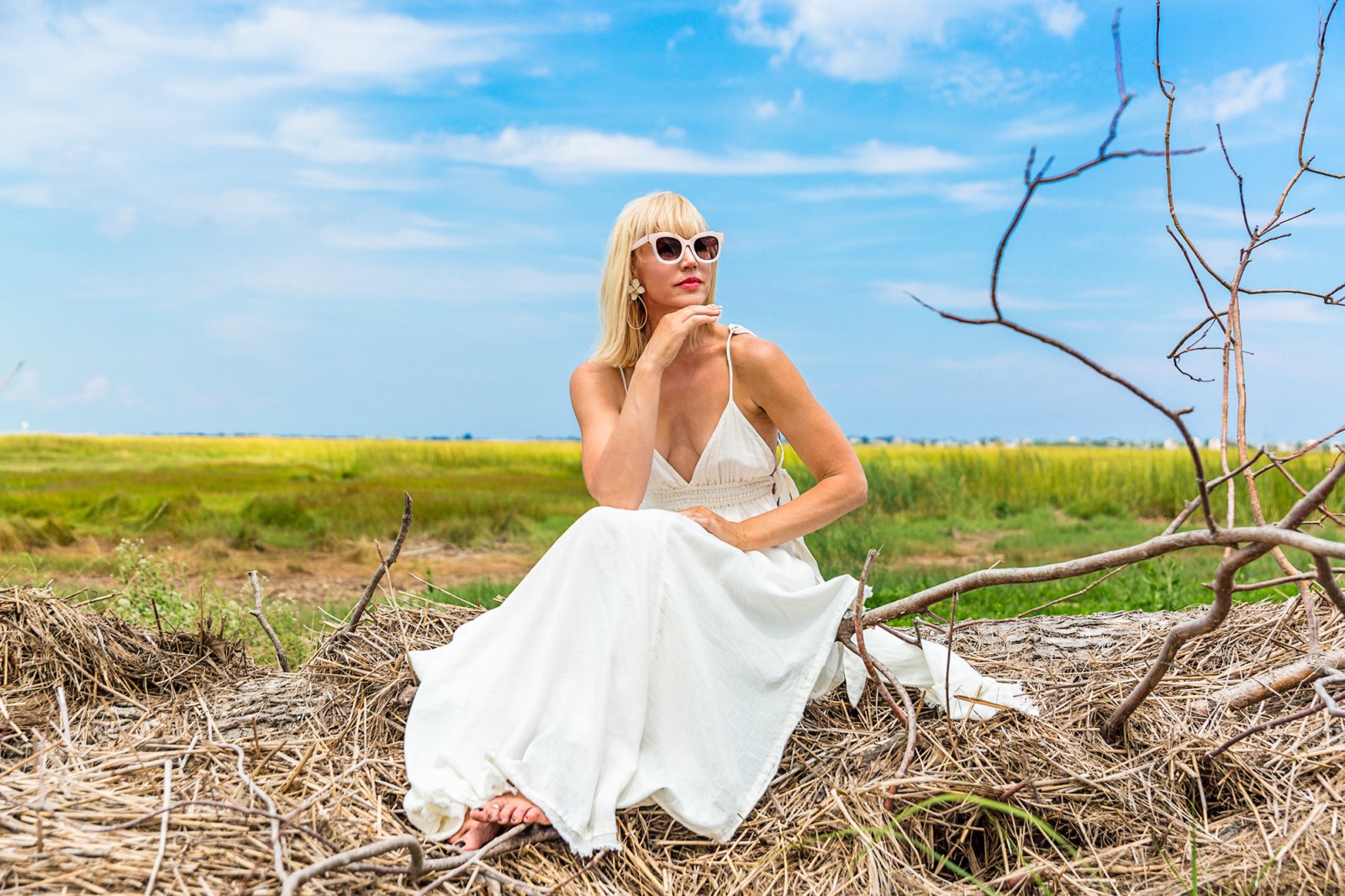 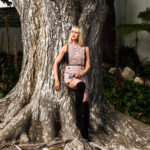 You look amazing in this white

Outstanding.
I retired .
Loved it.
Now I’ve rewired.
Back to business.
Love it.

Now that is wonderful to hear, Karen. Thank you for sharing!

This photo shoot is absolutely perfect…and even more so because it was spontaneous! And you are so right…if not now, when?
Debbie
http://www.fashionfairydust.com

If not now, when? I know many people think my blog is about fashion but it’s so much more. I love opening up a dialogue in the hopes of reducing stigma or busting taboos that no longer serve us. Thank you for your support my friend and Fierce sister!

Love the setting! Exactly something I’d do too Catherine. Beautiful.

I know you would! Maybe Always will have us do it together, sister. I’ll definitely suggest it as I know we are on the same page when it comes to being open and vulnerable as well as tackling taboo subjects.

Oh my stars! You absolutely nailed it, Sister! I love this and I am right there with you wanting to take life by the horns! I’m sharing this with my son Jake as he will love the spontaneity from a photography standpoint. Thank you thank you for giving so many of us a voice and a nudge to go for it!

Thank you so much, my sweet sister. You are fabulous. I appreciate you sharing with your son. He’s quite the photog himself. And, yes, we must have this conversation. I absolutely love shining a light on sensitive subjects!

WOW!!
What an incredible story….. and you had an amazing photo shoot at that location which was inspired by your own story. Your spontaneity created a melding of two very raw incidents.
Thanks for sharing – your spontaneity is so inspiring!!!

Thank you, Beverly! It was as spontaneous as they come and aren’t they the most fun shoots?

And look at how right you were. What a fantastic backdrop! Of course the beauty of the photo is the woman in the white dress!!!
I’ve never been good at spontaneity, but trust me…I’m working at it!! #crazyplanner
XOXO
Jodie
http://www.jtouchofstyle.com

I would love to do one with you sister! You know I rarely plan and simply toss things on and run out the door. Doing my makeup in the car is a regular occurrence for me!

Perfectly written. I’m with you sister. Capture those moments now before that day is long gone. I love our spontaneous moments together. You are an inspiration to all ❤️

I do love spontaneity my dear friend. So many fun memories with you!

FacebookTwitterInstagrampinterestBloglovinYoutubeLinkedin
Search
“All great changes are preceded by chaos.” –

Moxie On Monday-Don’t Let COVID-19 Put Your Back

“Your body cannot heal without play. Your mind c

“I believe when life gives you lemons, you shoul

“They say a person needs just three things to be

MOXIE ON MONDAY - Thoughts from a Social Distance: