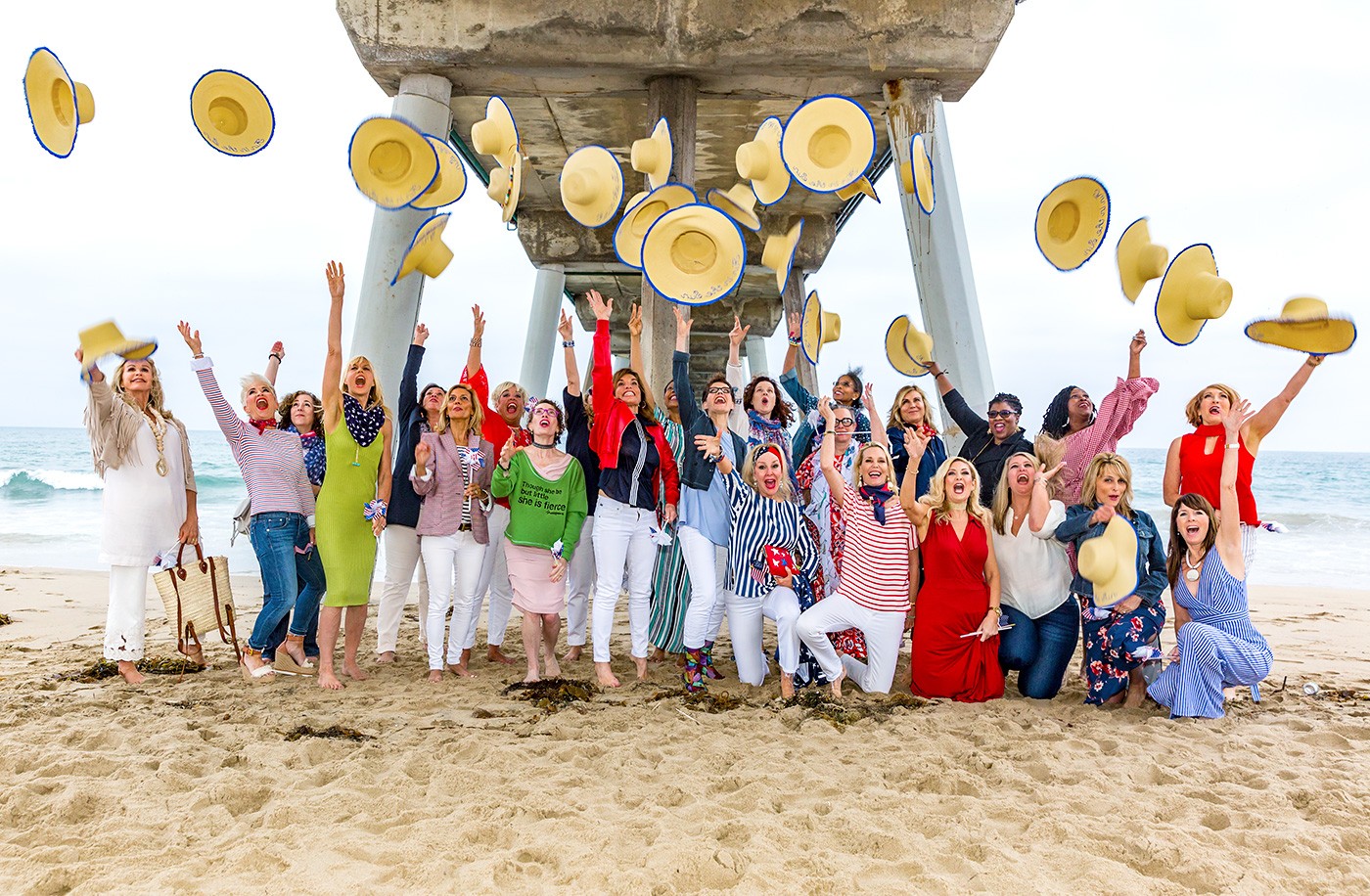 “Now that’s what I call a close encounter.“ – Will Smith, Independence Day

As firecrackers lit up the sky on Independence Day, the women of The Fierce 50 Revolution lit up the City of Angels, traveling from all corners of the globe on a powerful mission. These are women in their Second Act of life. They are mothers, daughters, sisters, wives, caretakers, entrepreneurs, bloggers, authors and so much more. They are women who know what it takes to reach midlife. They’ve overcome immense adversity as well as celebrated the many joys that life has brought their way.

Los Angeles will never be the same after a Fierce and Fabulous Weekend Extravaganza with the members of the Revolution. The festivities were kicked off on Friday night at the jewel of Redondo Beach, The Redondo Beach Hotel. It all began with an awesome group commercial sponsored by Madison Reed. An innovative hair care company with a conscience, Madison Reed has endeared itself to the women of The Fierce 50. With similar messages of empowerment, the group couldn’t have been more lively shouting out their love for Madison Reed. And they were in for a treat, as their goodie bags were filled with hair care products courtesy of the brand.

With a lively DJ courtesy of VOX DJ’s, the dance floor on the rooftop deck overlooking the marina and Pacific Ocean quickly became the main attraction. It didn’t take long for the women to bond outside of the virtual world and create new friendships. They are women from every walk of life. Some are bloggers and others are simply there to support the community and the overall mission to shift the perception of women over 50. These women represent a new generation, no longer the generations of their parents or grandparents, but rather a more youthful group of women who have a deep desire to share their wisdom. These women believe that age is just a number and it’s your attitude about life that truly matters. And “attitude” they brought, as they lit up the dance floor while doing “The Wobble.” There was an amazingly youthful energy present as these women are clearly here to show the world that they are truly just beginning! 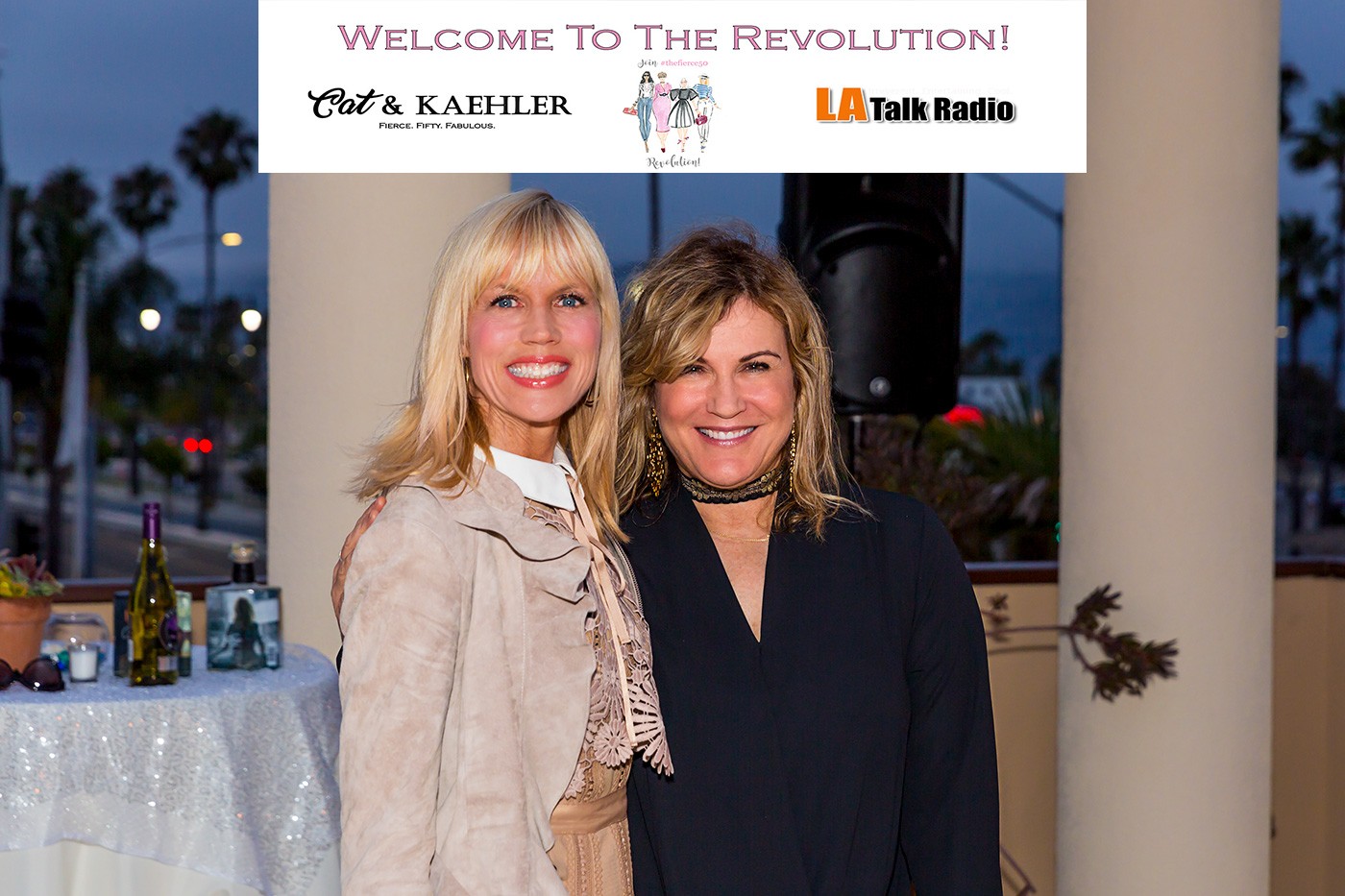 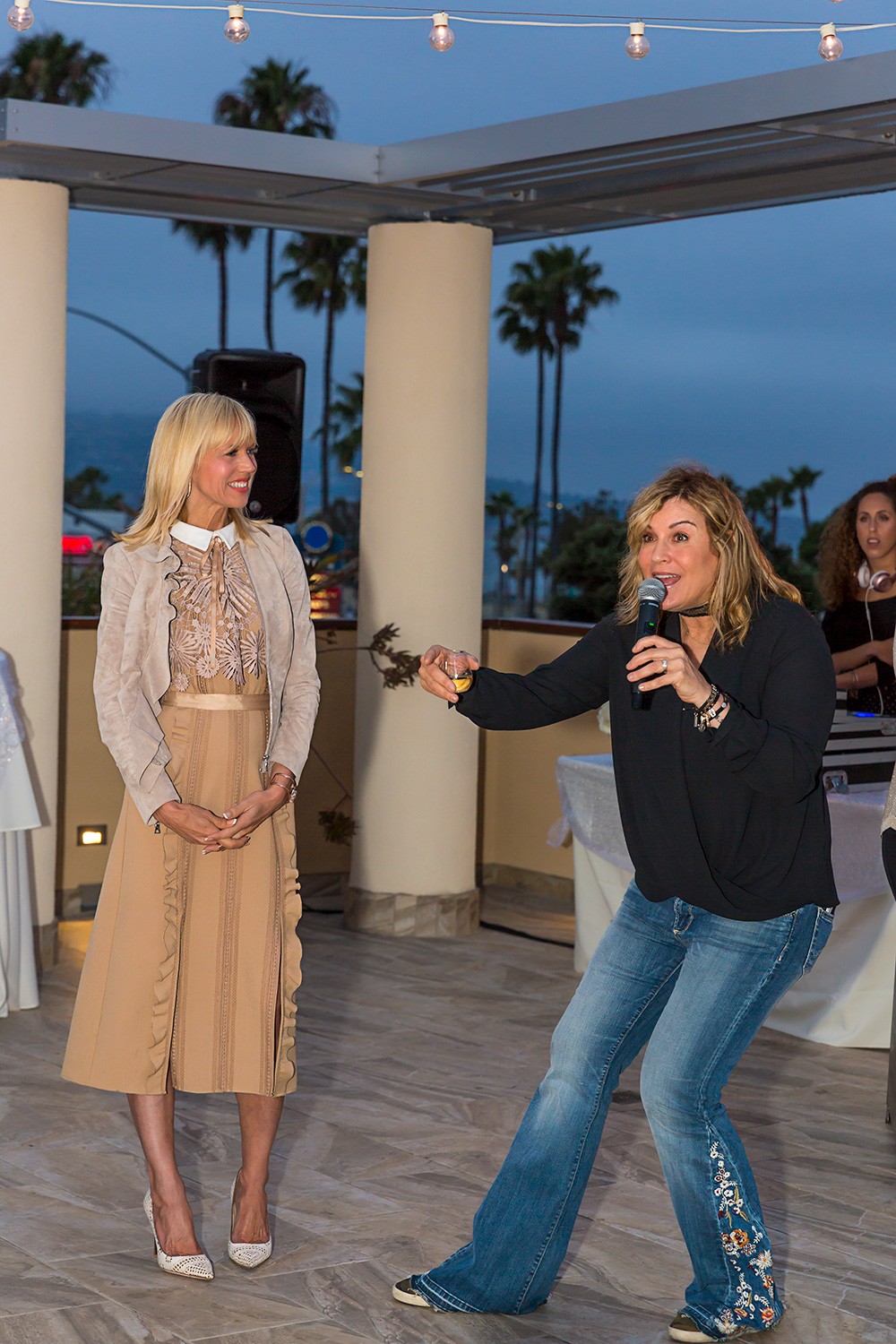 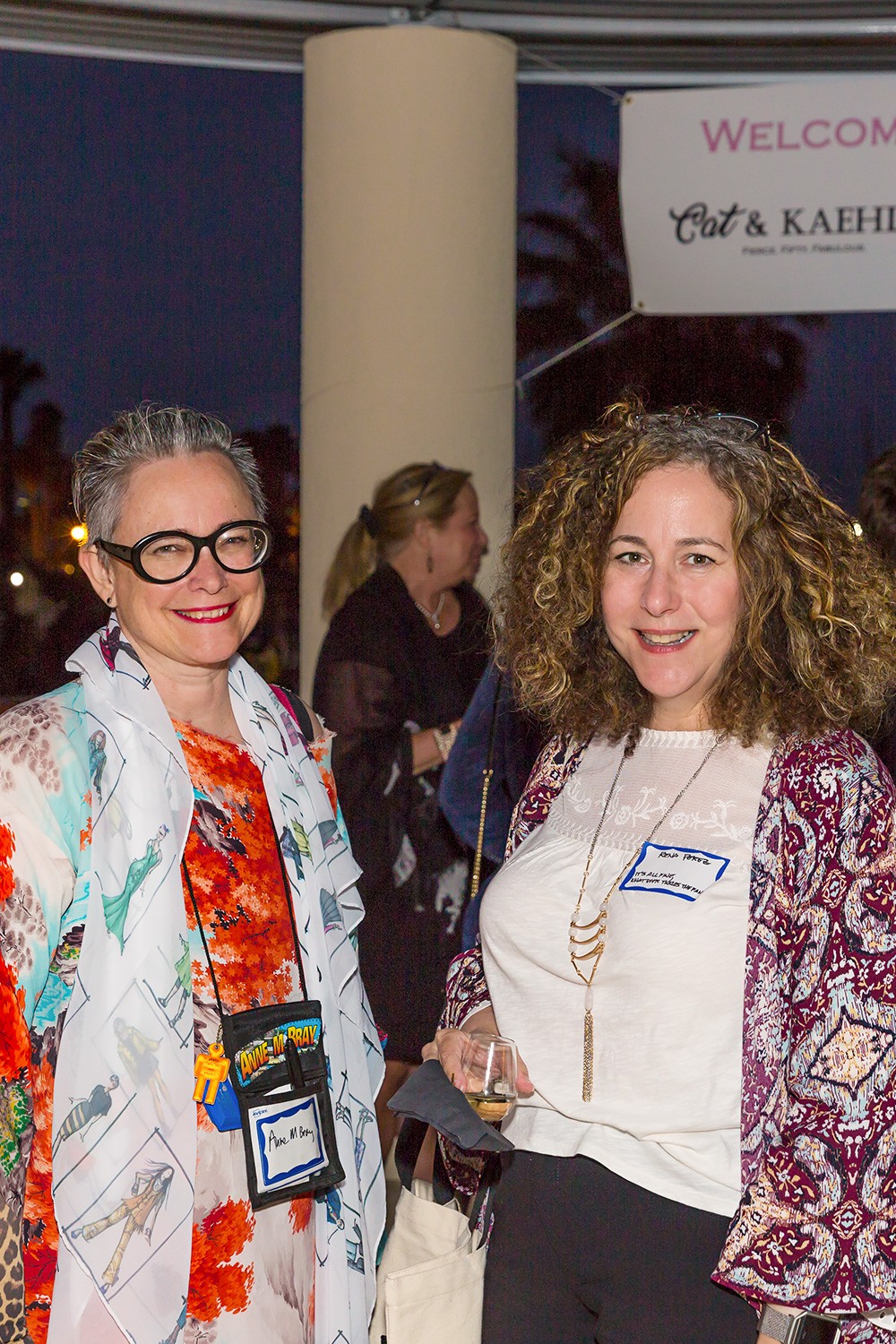 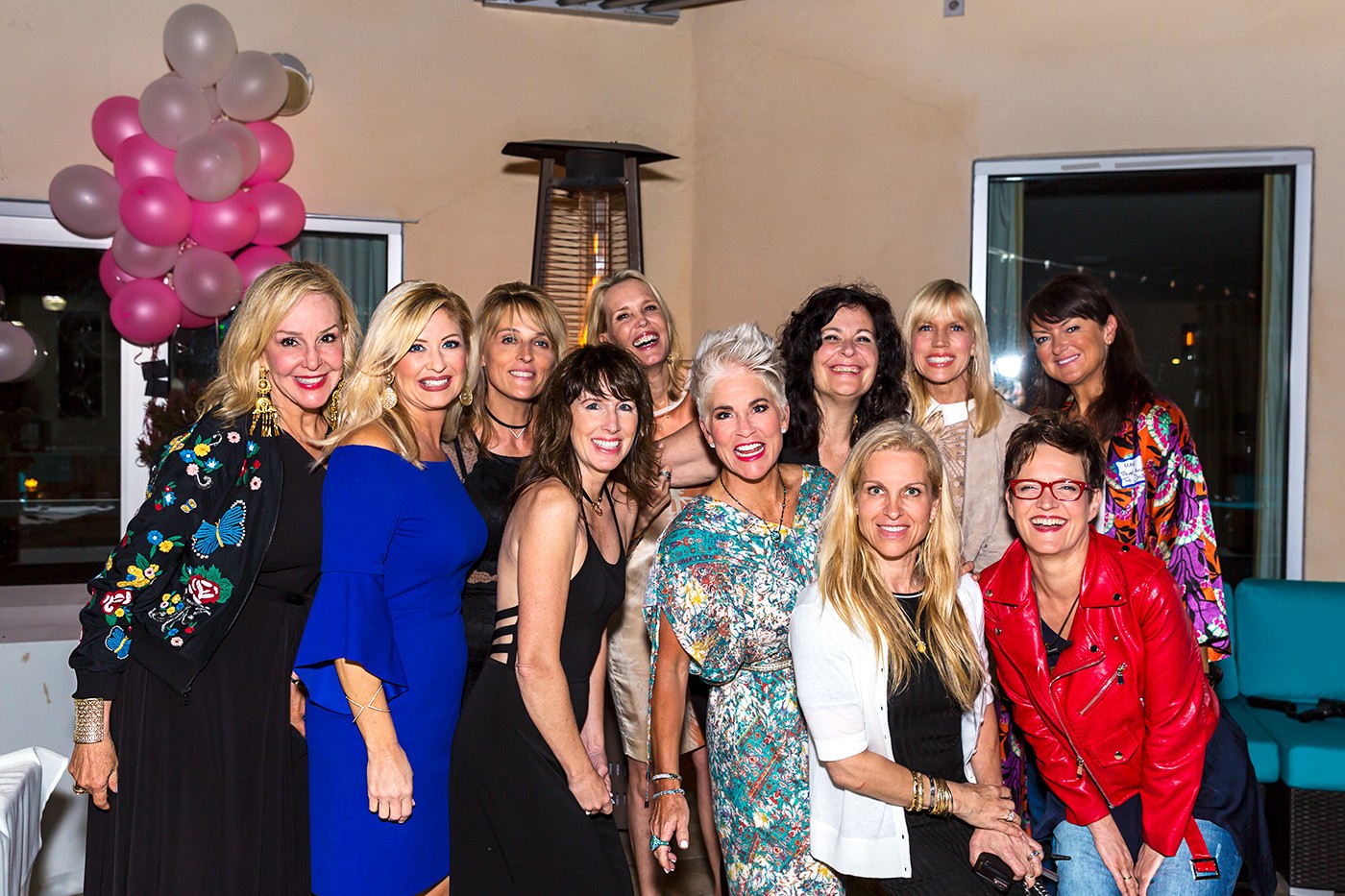 It was time for some refreshing libations and a tasty spread provided by The Rockefeller Gastropub. With multiple locations in the South Bay, The Rockefeller is an institution on Pier Avenue in Hermosa Beach. Always teeming with a full house, it’s a favorite among the locals. Beginning with the freshest avocado and heirloom tomato salad and the tastiest spicy green beans, the gals  couldn’t wait to dig in. When it comes to comfort food, there’s nothing better than The Rockefeller’s Truffle Mac and Cheese with Bacon. Mmmmmm. Delicious Swedish Meatballs and Ahi Tuna appetizers were a big hit as the revelers took a break from the dance floor to replenish.

Champagne was flowing courtesy of G.H. Mumm and some amazing red and white wines from Kenwood Vineyards and Direct Cellars Wine Club. For the craft beer lovers, the suds on tap were provided by local brewer Scholb Brewing. … Dessert was provided by Hermosa Pie and Cake with the most delectable mini apple and peach pies with freshly whipped mascarpone cream. Dancing works up an appetite and The Rockefeller’s smorgasboard of cozy comfort food and spectacular service ensured the guests were well taken care of. They’ve earned a well deserved reputation for customer service in the South Bay and delicious American fare. 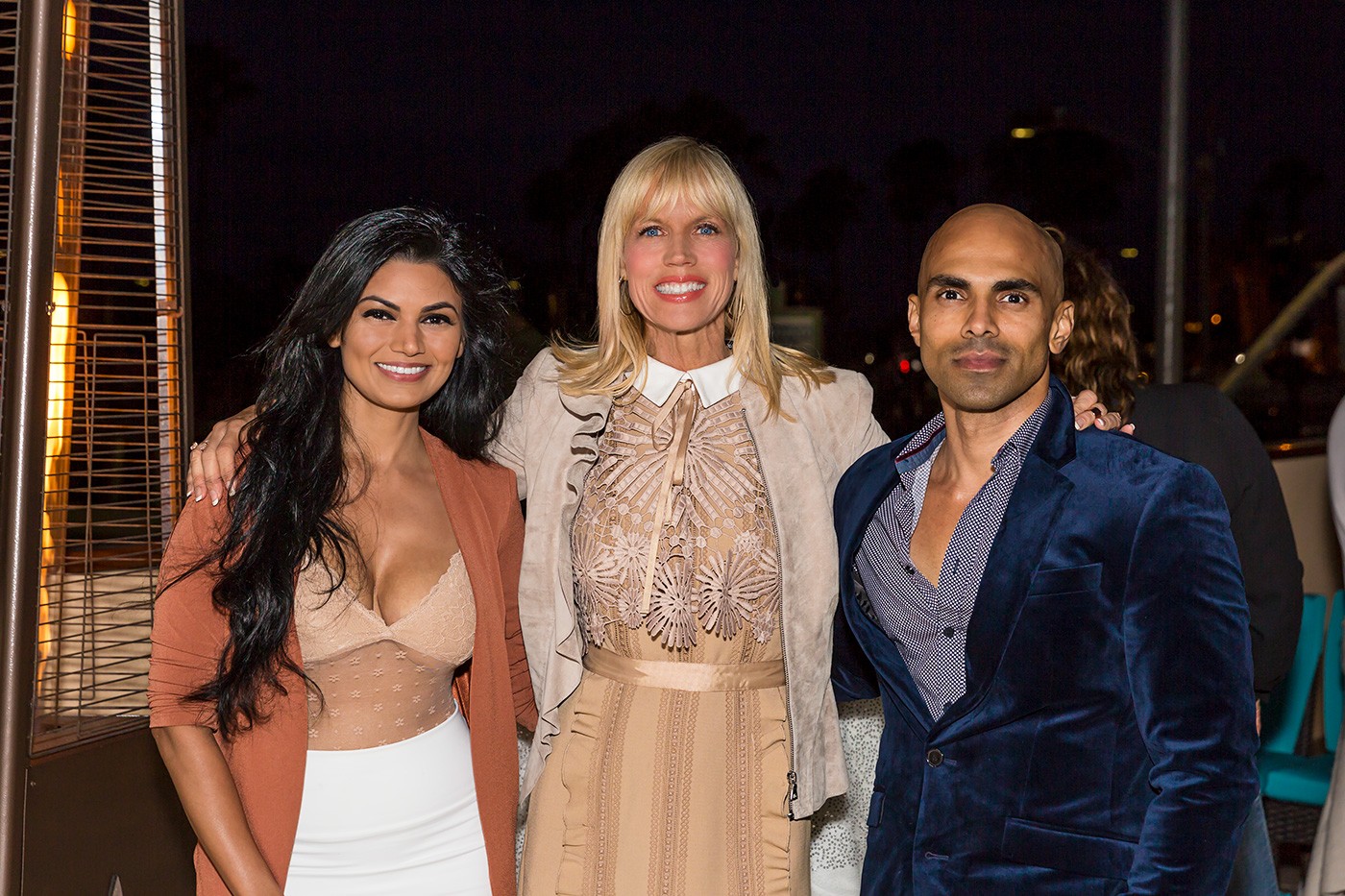 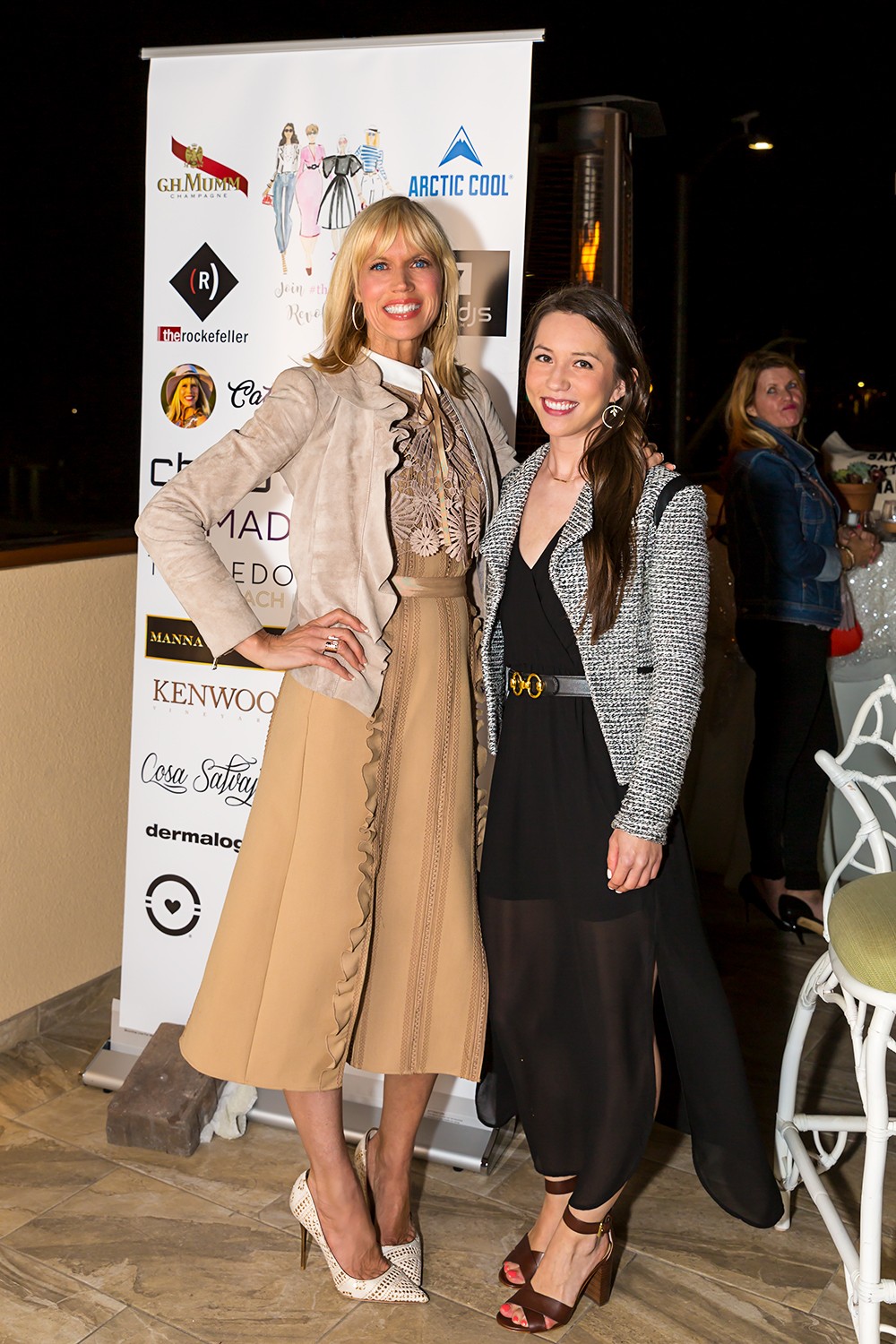 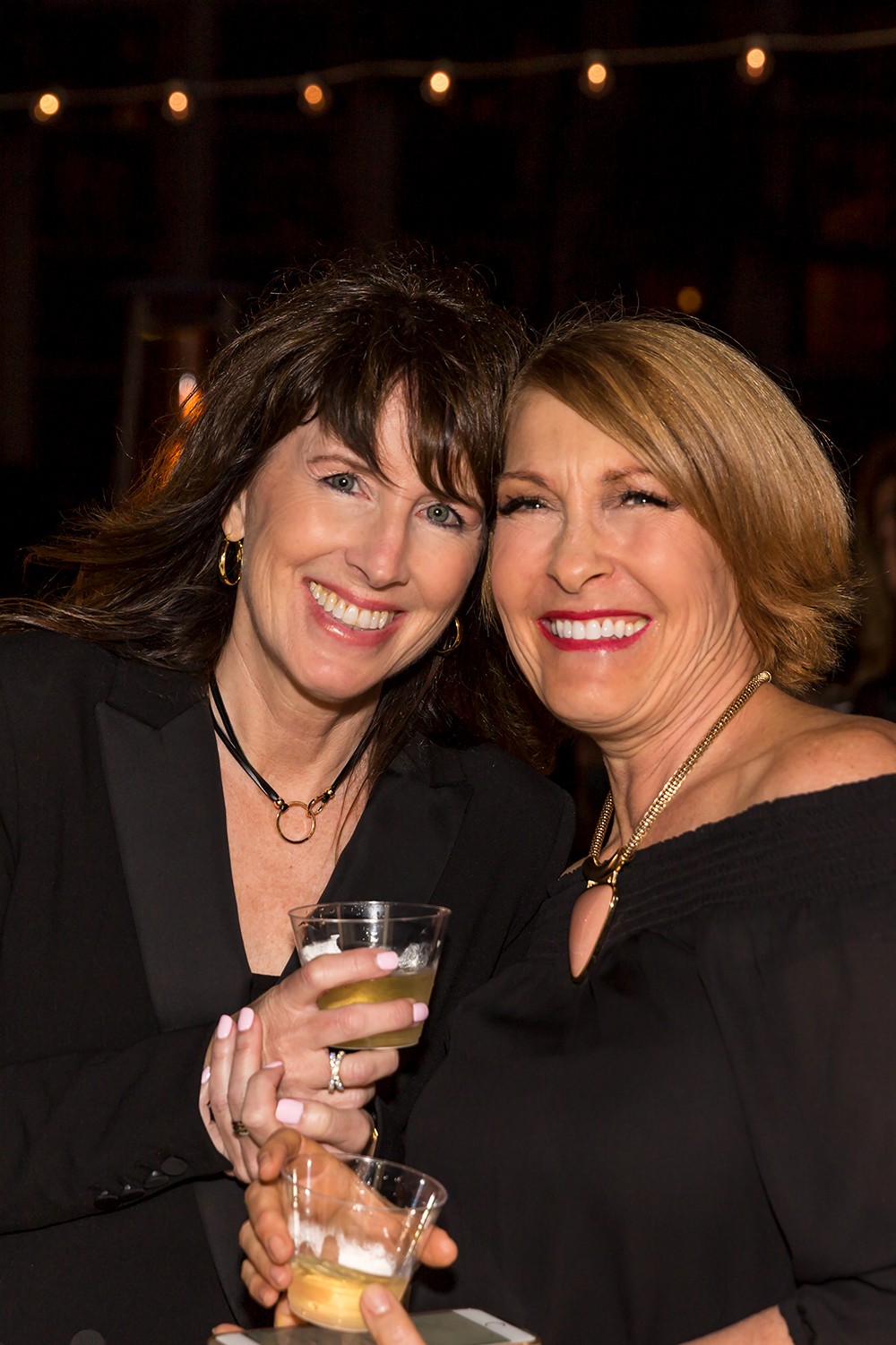 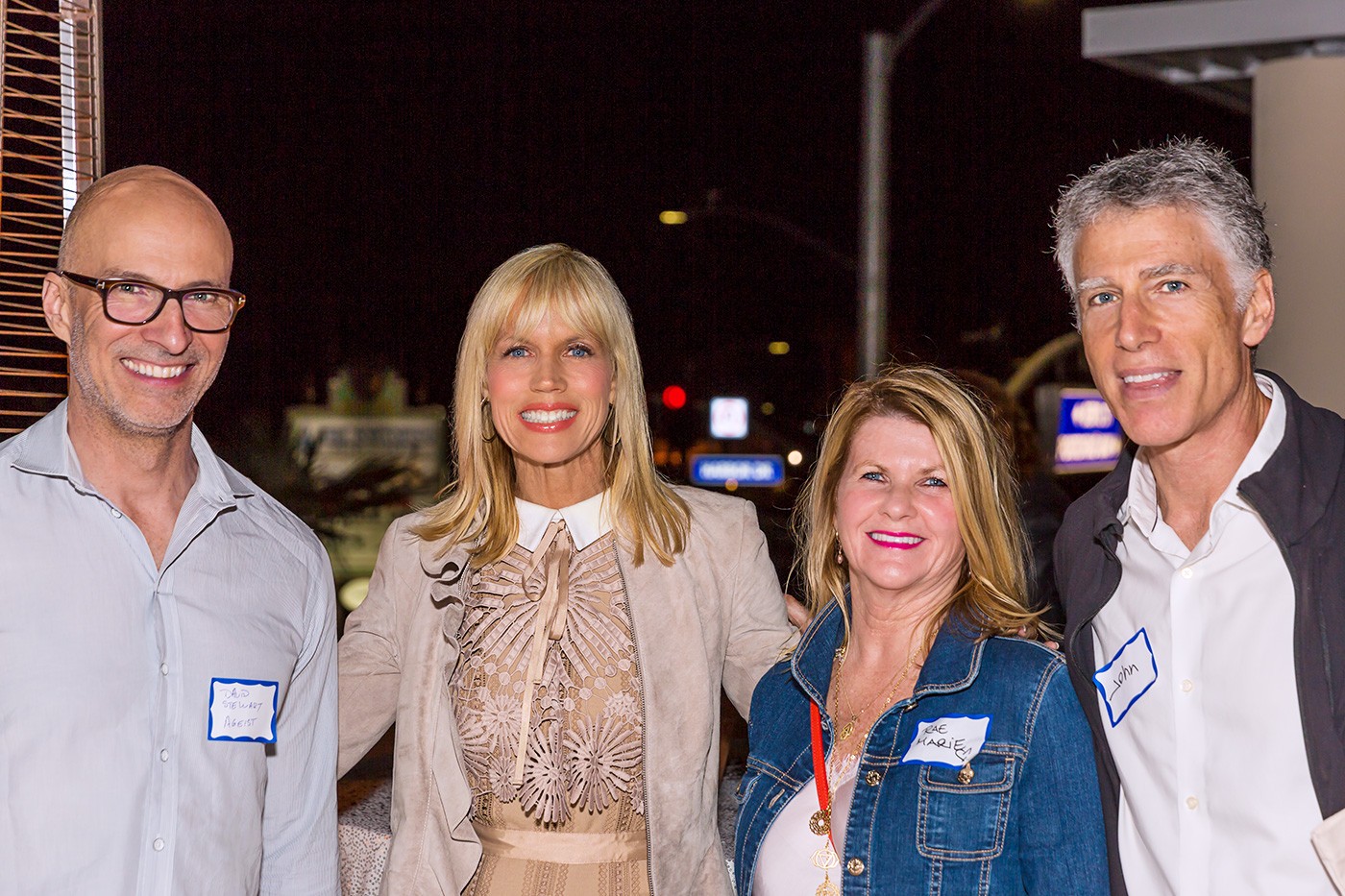 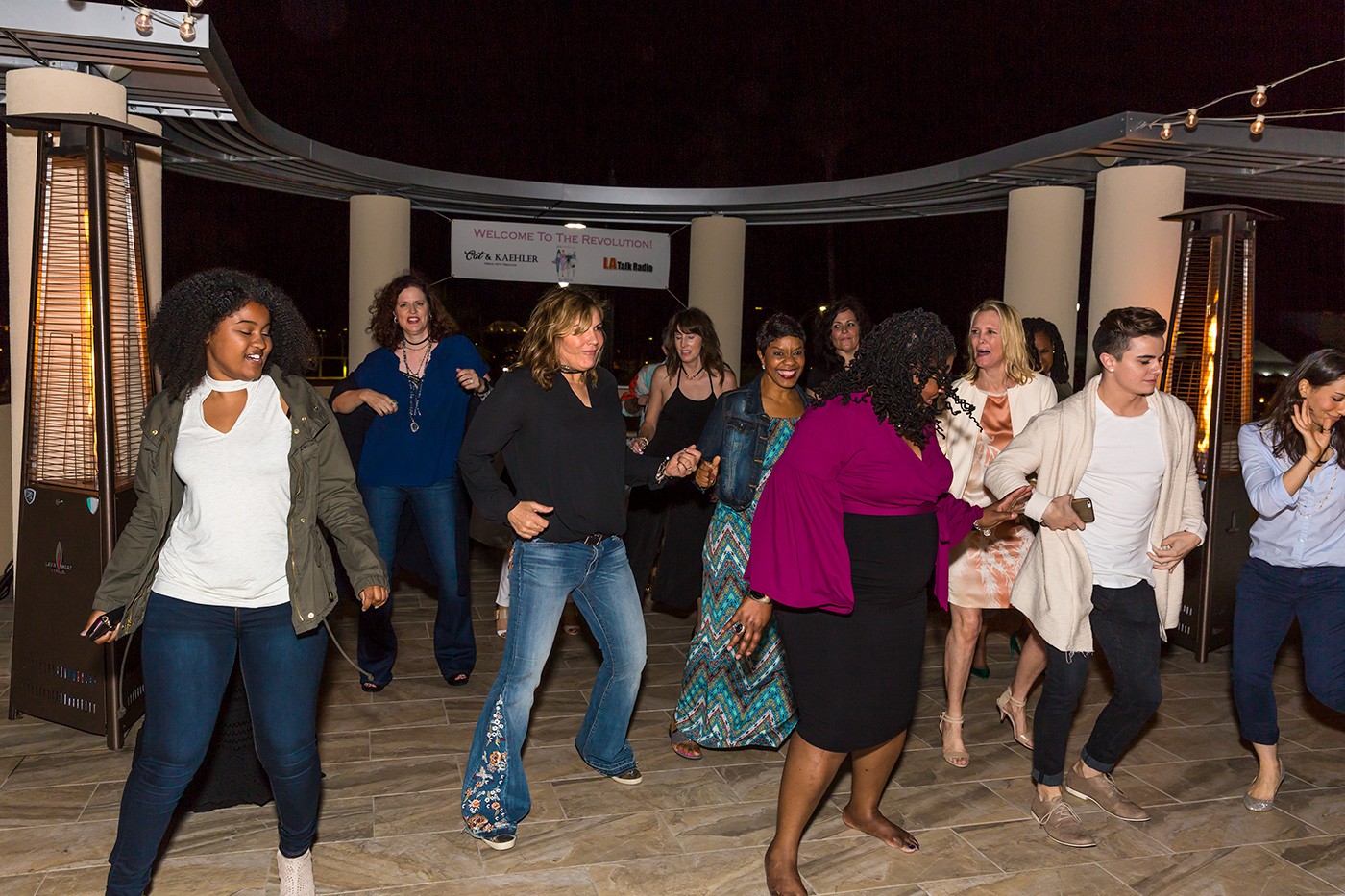 It was on to VOX DJ’s fabulous photo booth with the perfect Hollywood backdrop and glamorous accessories. Always a popular feature among the bloggers, everyone got in on the action! Capturing memories and new friendships brought a whole lot of laughter and hugs all around. A party with The Fierce 50 Revolution wouldn’t be complete without some fabulous goodies from Chico’s. Chico’s is a brand that has been celebrating women of midlife since the day it’s doors opened. It’s as dedicated today as the day it opened and has embraced women at midlife and beyond, sending a powerful message of acceptance and relevance. With tote bags embellished with sequined graphics generously donated by Chico’s, the women loaded their bags with endless raffle and giveaway prizes. With blouses by Single, Absolute Lime by Absolut Vodka, dresses and belts by Manna Dabholkar, Casa Salvaje Tequila by Elle France, skincare by Dermalogica, bracelets by LYLO, and cooling towels by Arctic Cool, and so much more, these women were treated like Hollywood royalty and couldn’t have been more appreciative. Lisa Lew, the co-producer of P&L Media generously provided treasures from the Daytime Emmy Awards as many of the women scooped up their raffle prizes.

It all happened at a prime location in the South Bay, The Redondo Beach Hotel. Newly opened last year, it’s become a darling in the community. Owned by Pacifica Hotels and managed by Chris Matsumoto, the vibe is one that’s family friendly while the rooms are cozy in the most beachy, serene palate. Overlooking the marina in Redondo Beach, with a gorgeous pool to view the unforgettable sunsets, it’s my first choice when friends come to visit in my hood. Chris, who has such a  friendly and down to earth demeanor, joined the festivities and we couldn’t have been more delighted. He has perfected the art of customer service and there’s no request that he won’t do his best to fulfill. With many of the women staying for the weekend, I knew they were in for a treat! 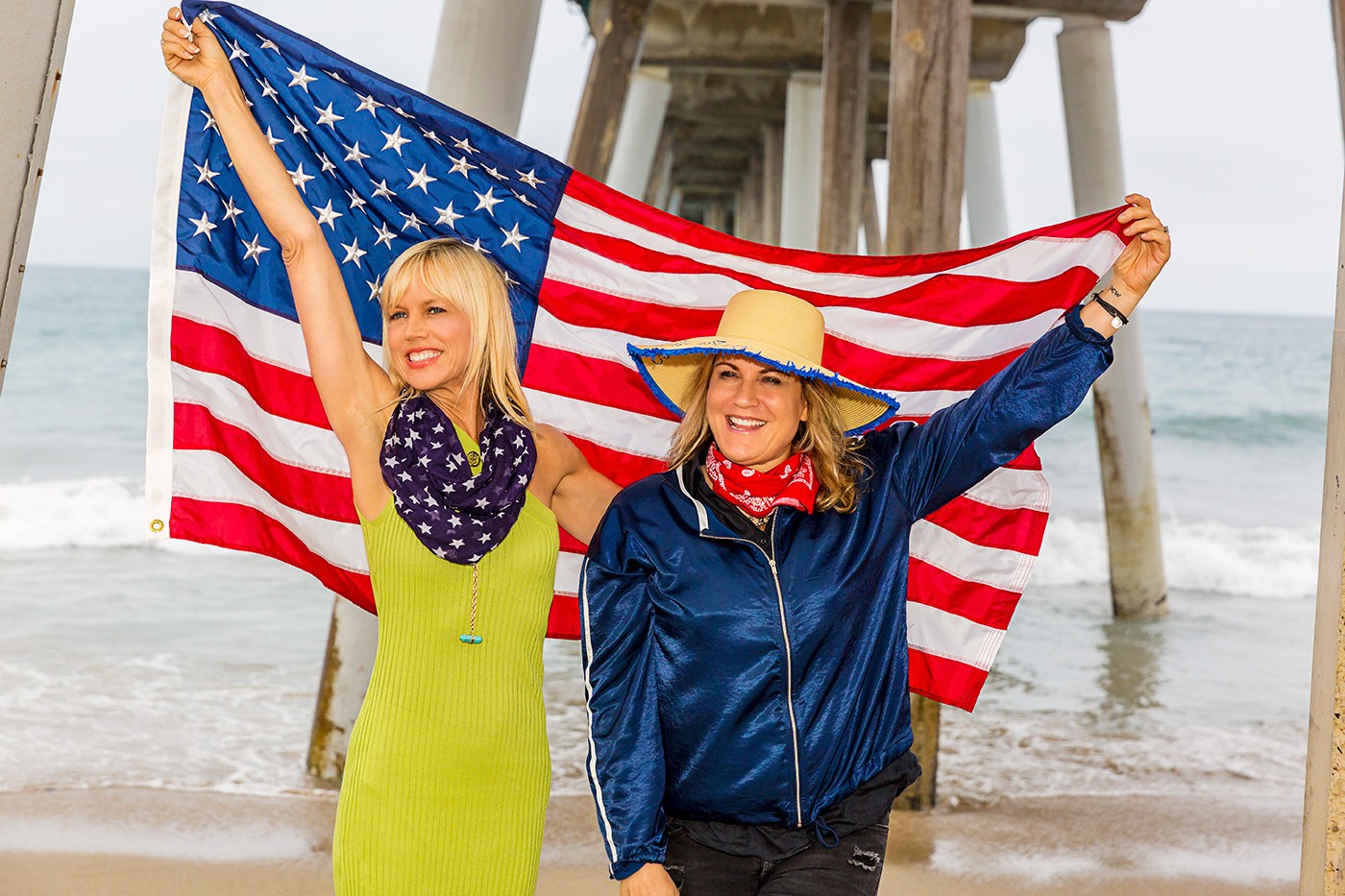 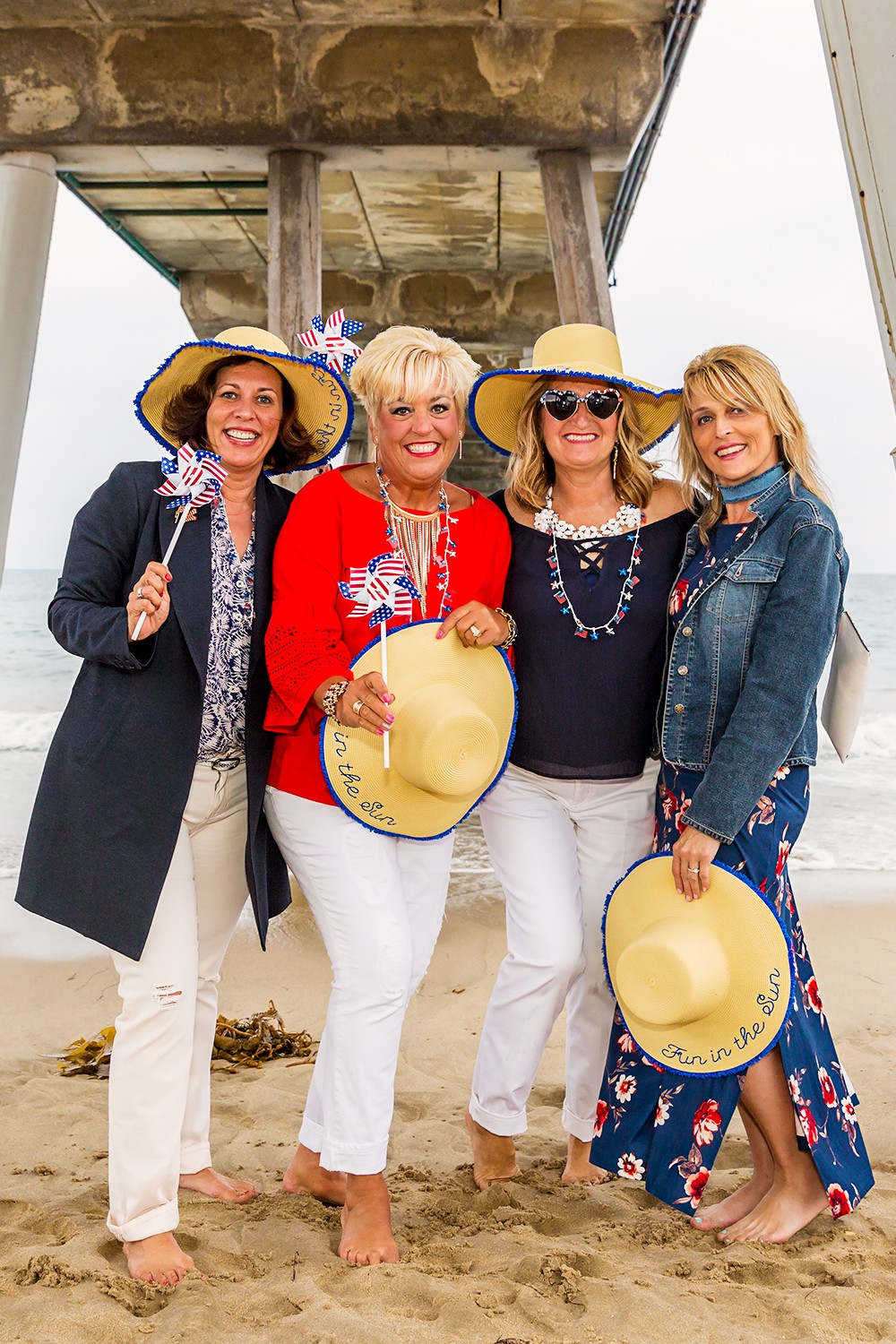 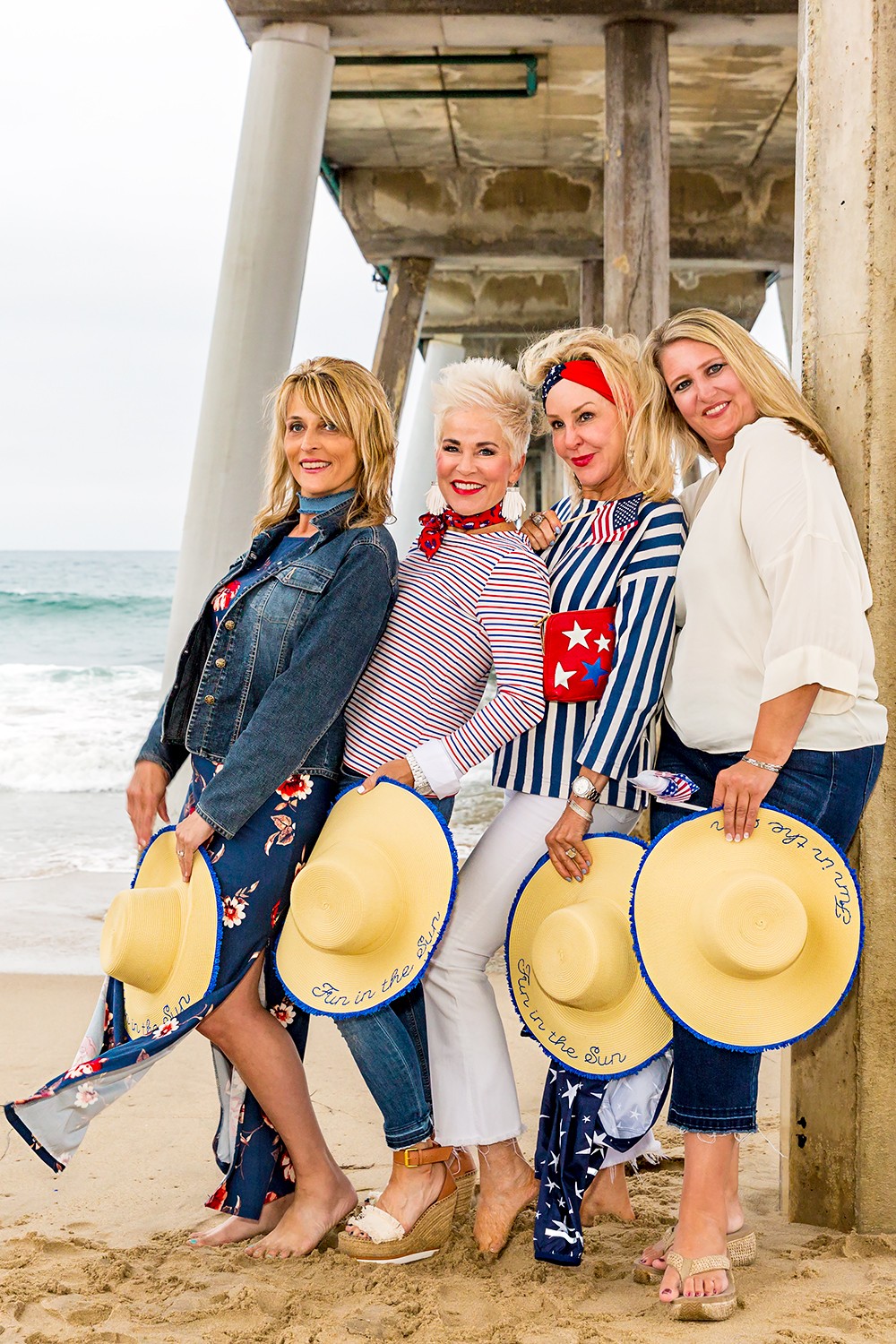 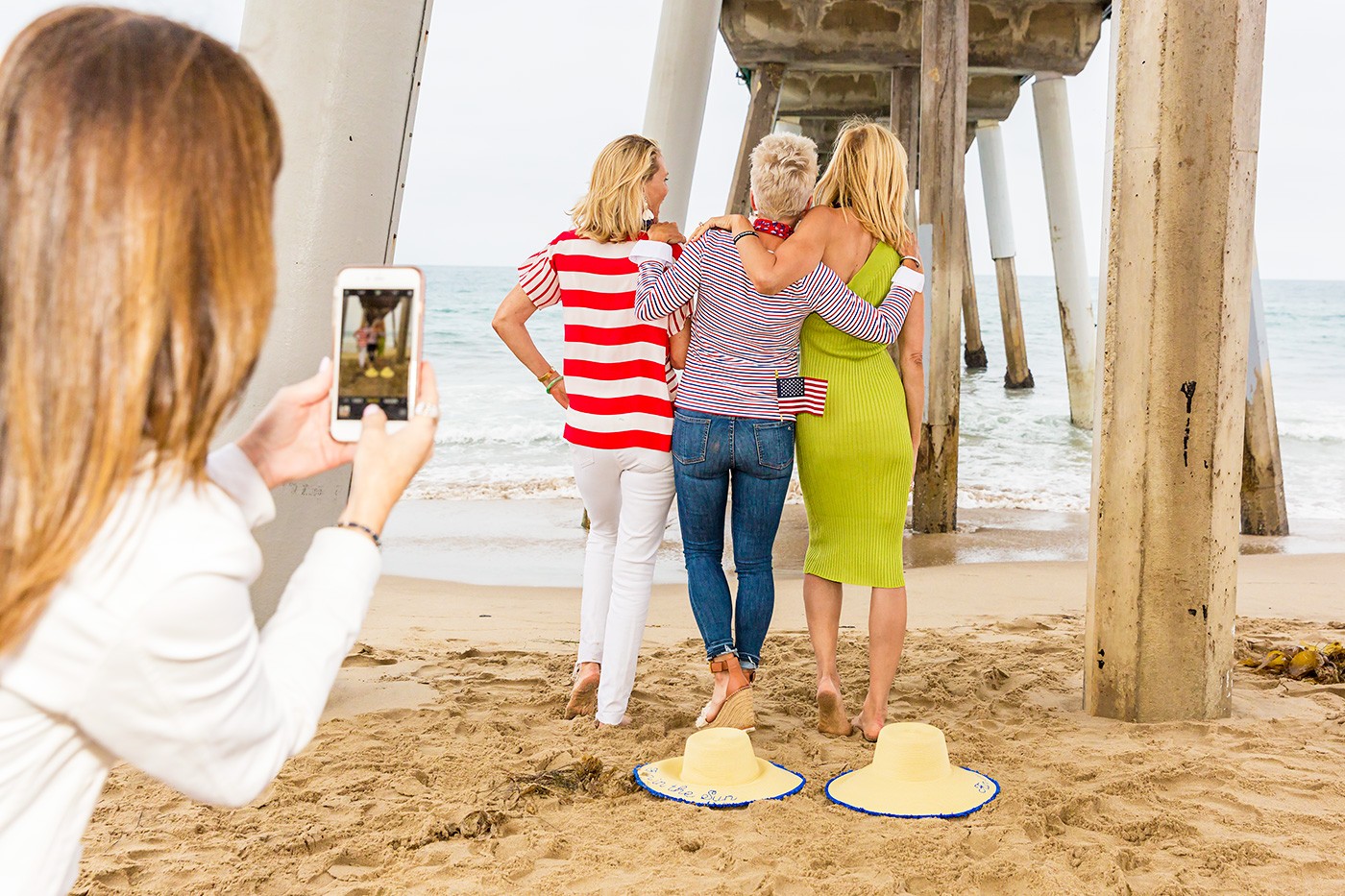 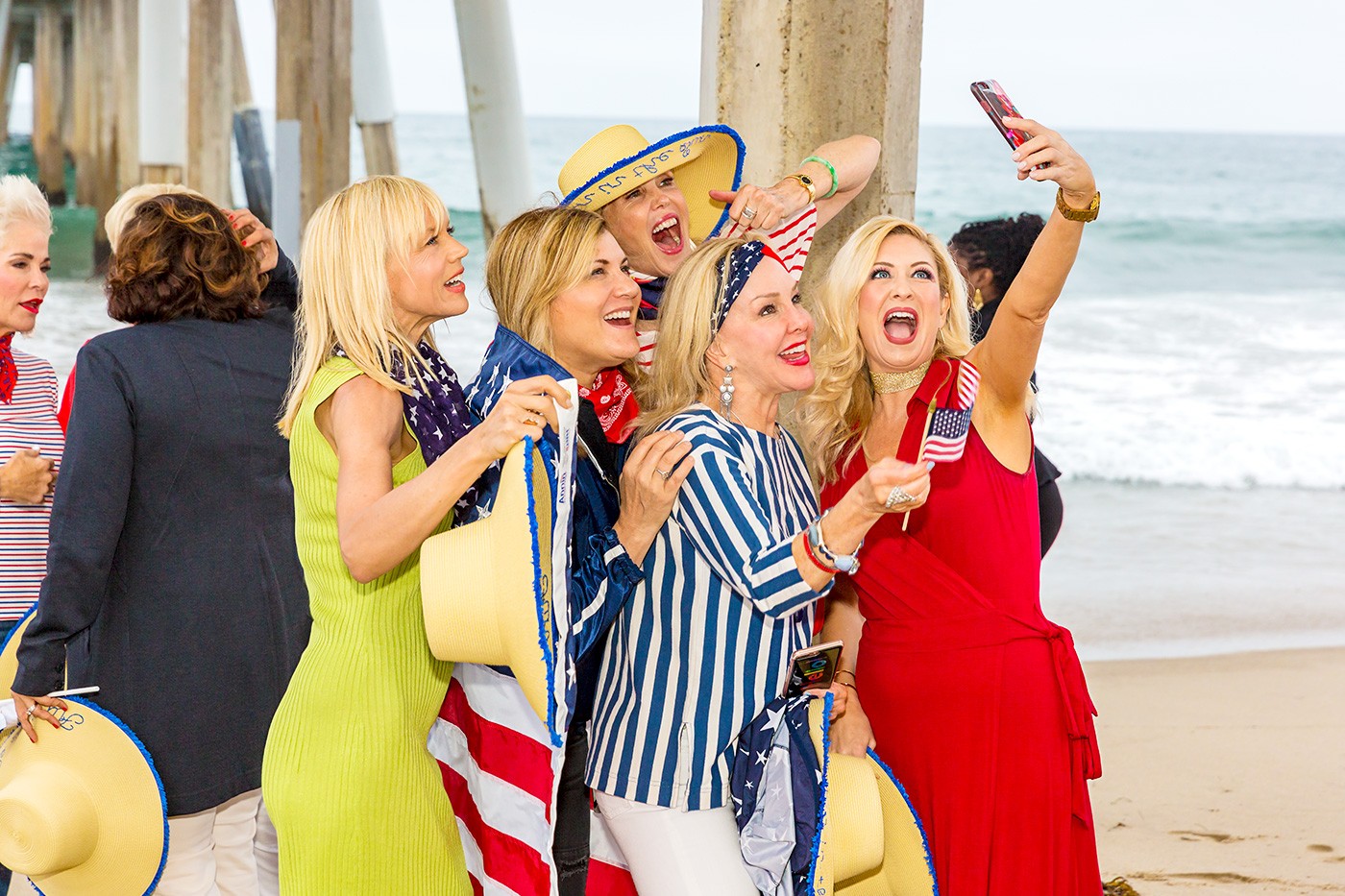 And, the weekend was only just beginning as the next morning the women were on to meet Kande Hall and Lenn Grabiner of French Kande. Kande launched her distinctive jewelry business when she turned 50. Her travels throughout France brought out a love for a variety of vintage medallions and she is the sole designer of her creations. With everything made to order, the women were shown her design studio and bonded with Kande while she shared her passion for her business and helping women in this demographic to feel beautiful. She’s a powerful example of the art of reinvention at midlife. Providing a beautiful brunch with…(please add food details), the women of The Fierce 50 shared their personal stories in return. It was a touching afternoon as they hugged goodbye and went back to rest before the evening’s activities. 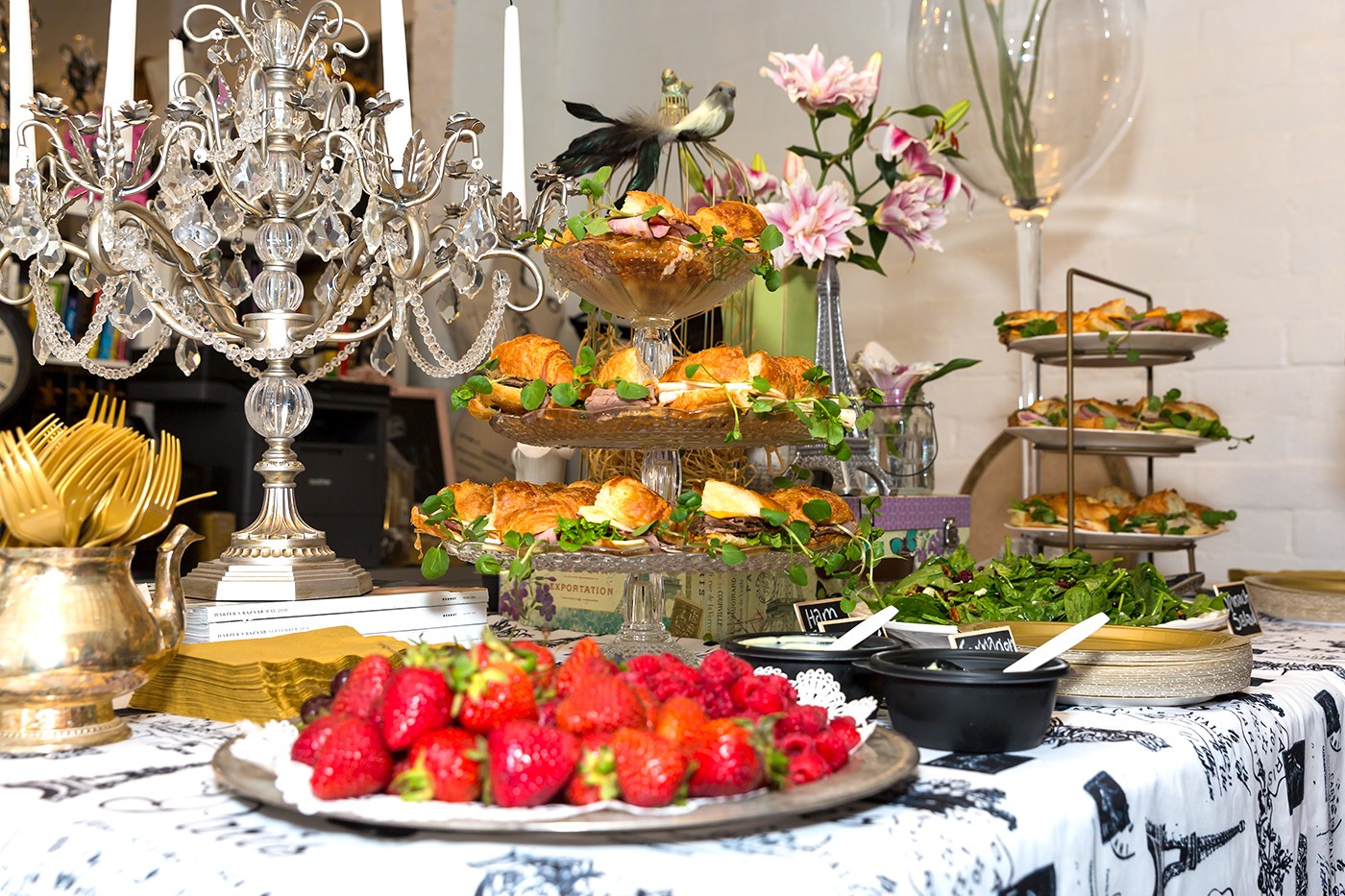 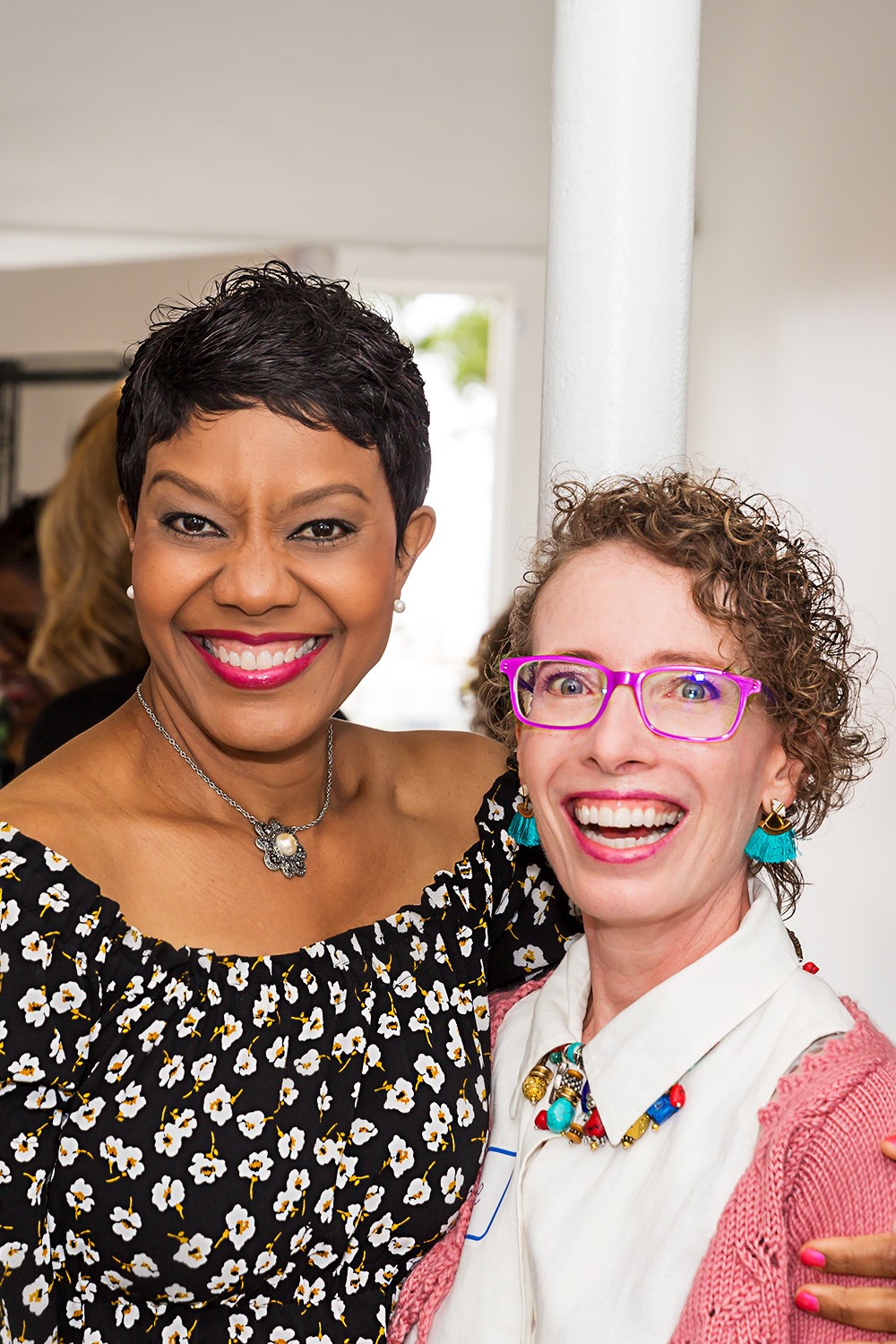 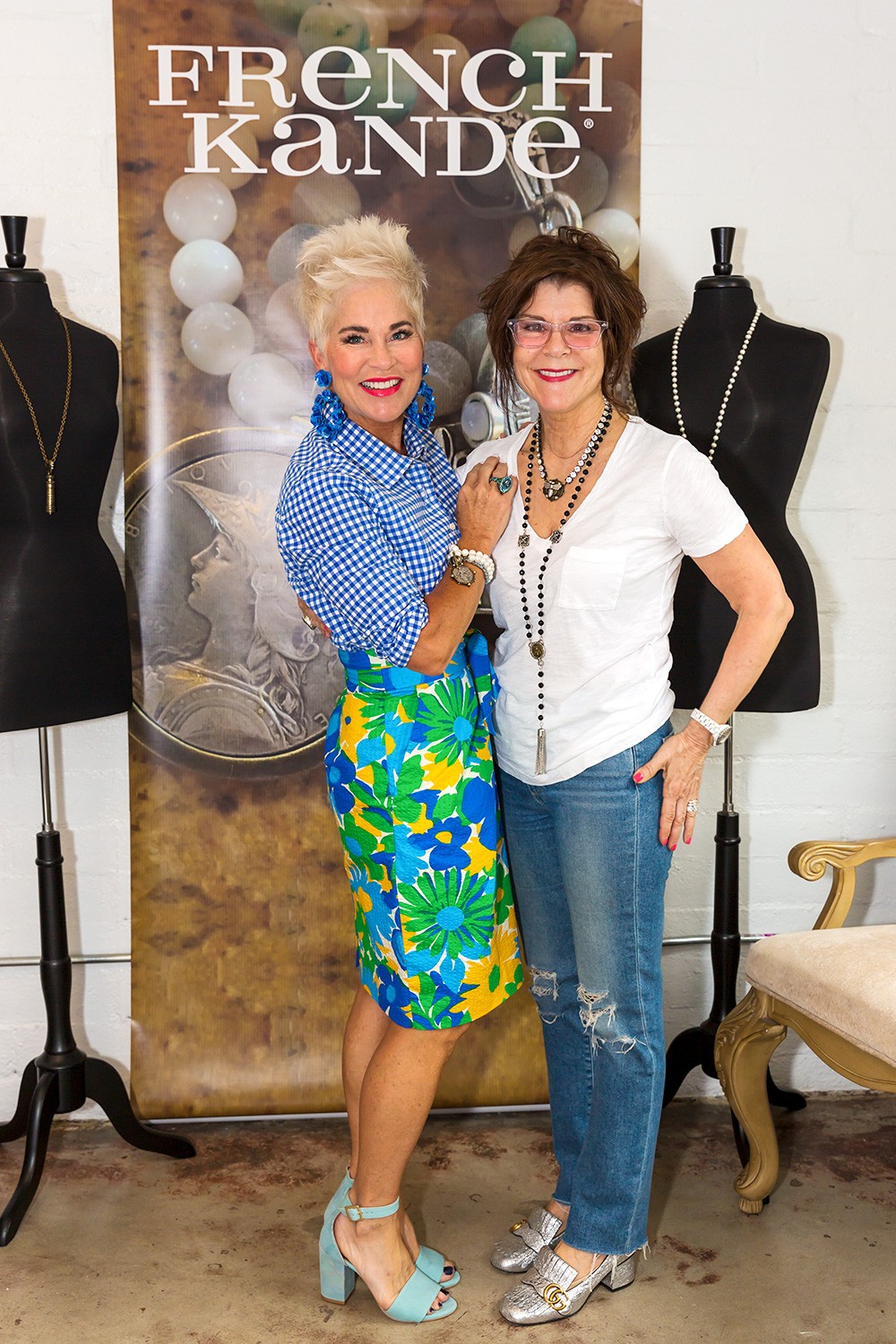 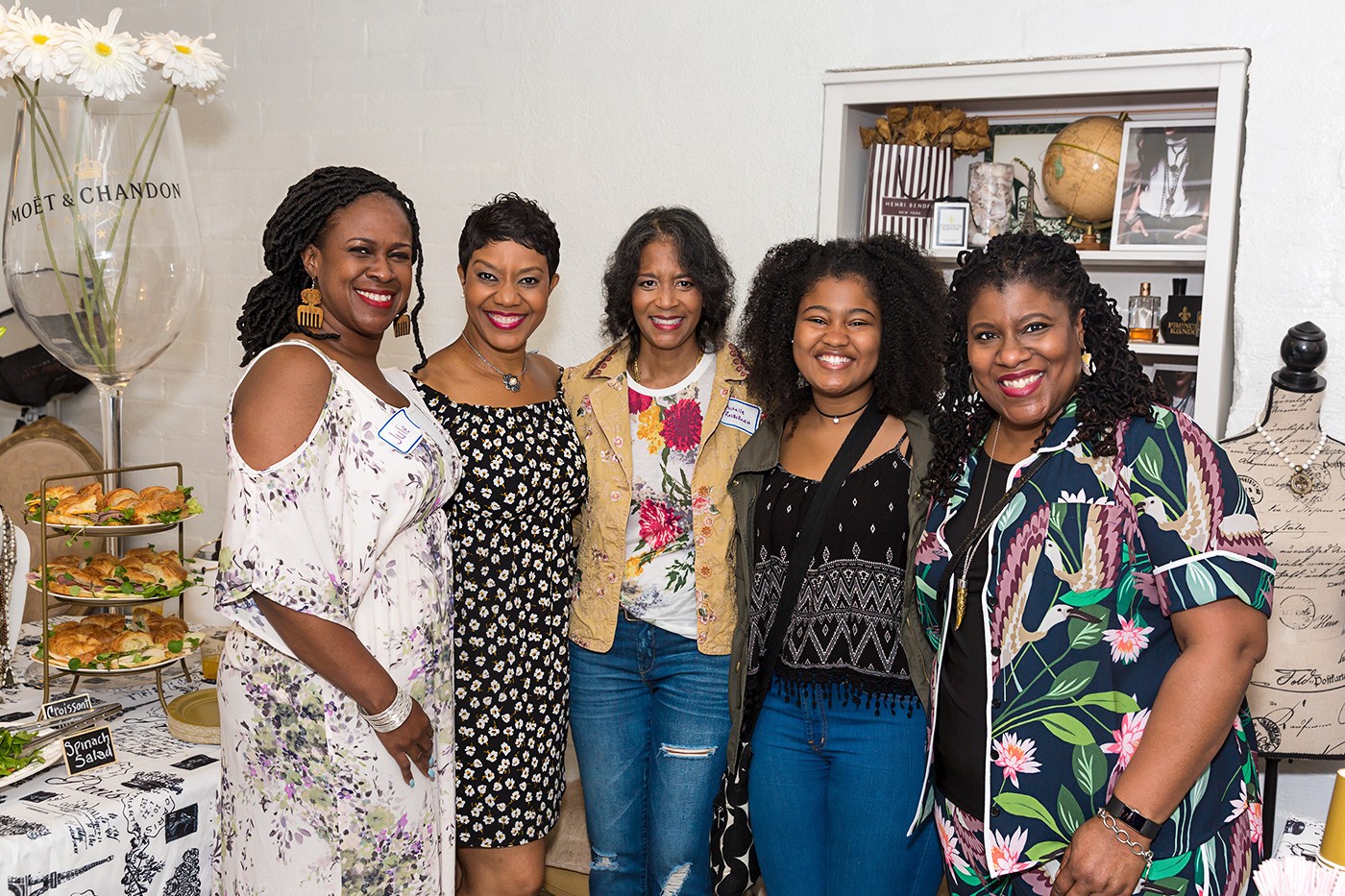 It was on to the famous Hermosa Beach Pier, where parts of LaLa Land were filmed. The women gathered under the pier, and as it was 4th of July weekend, it was time to pull out the stops with the red, white and blue. Laughing, playing in the surf, tossing their fabulous sun hats by Chico’s into the air, it was all captured in style. With a drone in tow, the women gave their most radiant grins and pulled out the American Flag. Covered in sand and salt water, with a little tar thrown in, it was time to head down the Pier and over to Hot’s Kitchen for a little Mexican Fiesta. Toasting with wine and and an amazing selection of craft beer over crispy chips, spicy salsa and savory guacamole, the celebration continued into the wee hours. It was time to head home to get some well needed rest as the final morning was going to be an early one.

What better way to finish off a banner weekend with The Fierce 50 than in classic Chico’s style? Time to hit my favorite Chico’s in So Cal, Chico’s on Montana in Santa Monica. One of the brightest and most vibrant shops in the area, it’s a well known respite for women at midlife as the boutique caters to this demographic. The customer service is out of this world and a rare to see in this day and age! Shannon Gunderson, the store manager, has become a friend and she paves the way for the vibe of the shop. Her team authentically cares about each and every customer. It’s the personalized attention that makes the difference as we watched customer after customer leave the story feeling pampered and more beautiful than ever. It’s Chico’s philosophy that’s so remarkable. It’s truly not about selling clothes. Chico’s is all about creating a personal experience for YOU! Trust me. Stop into a Chico’s and experience the magic for yourself. 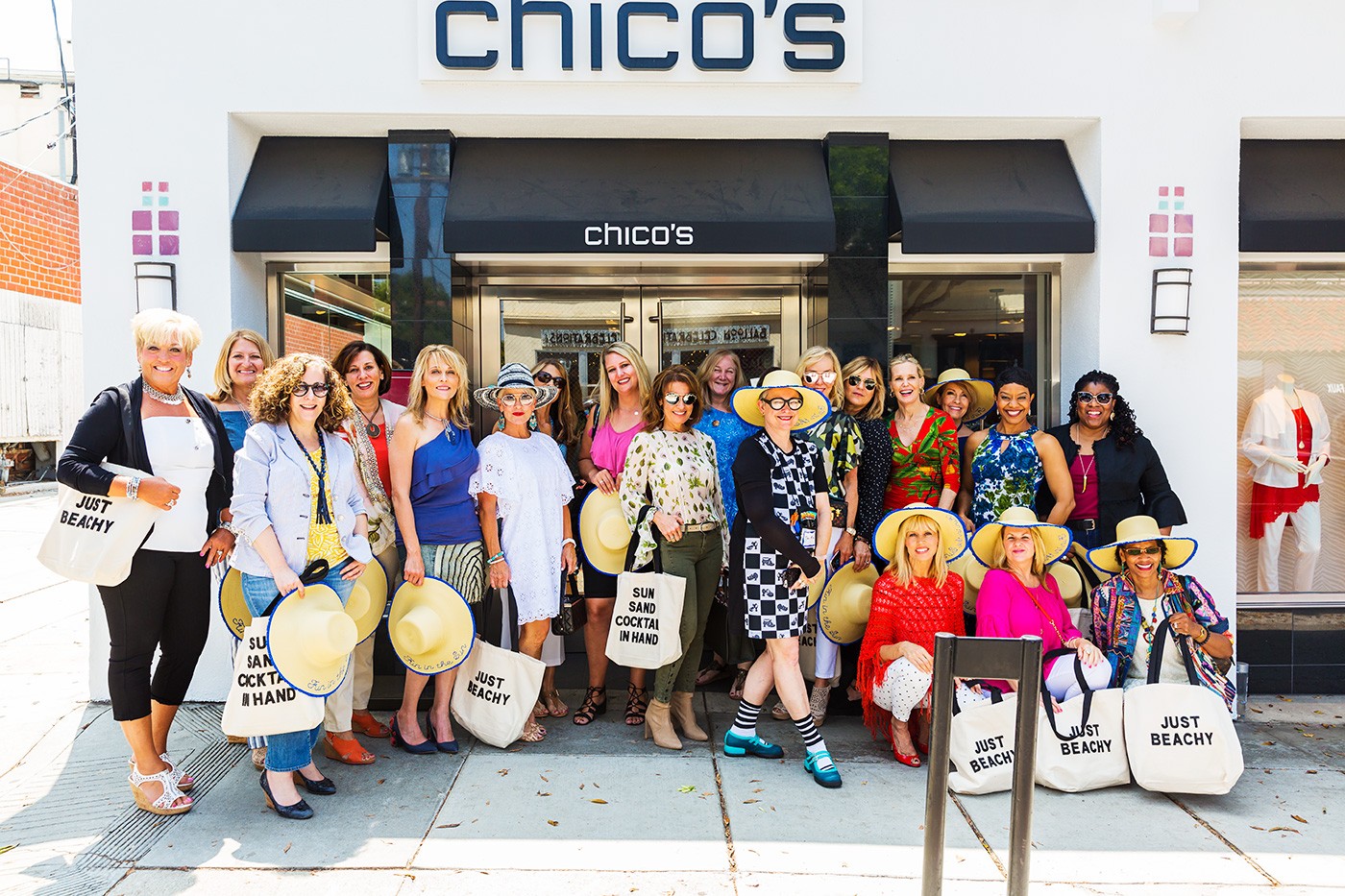 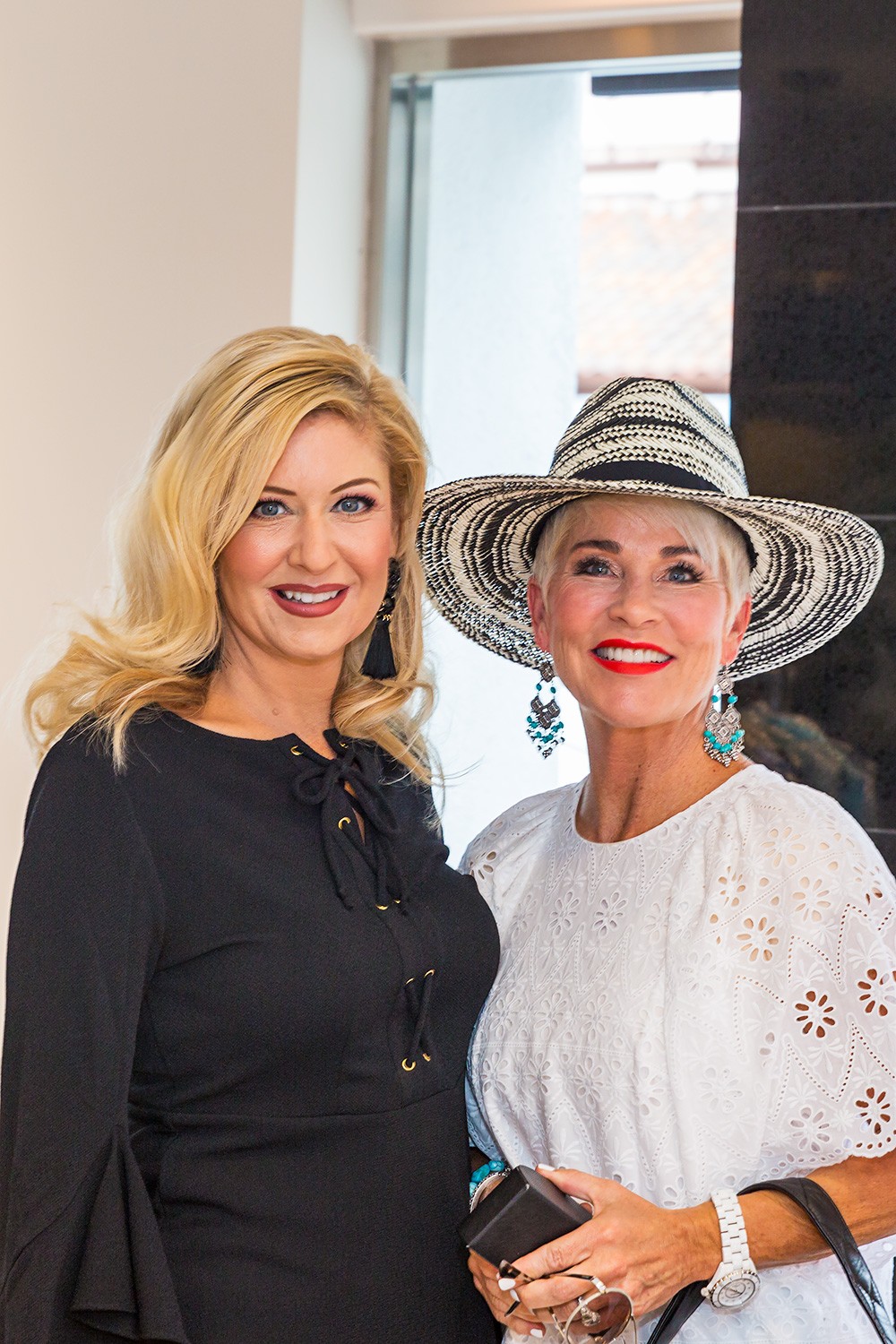 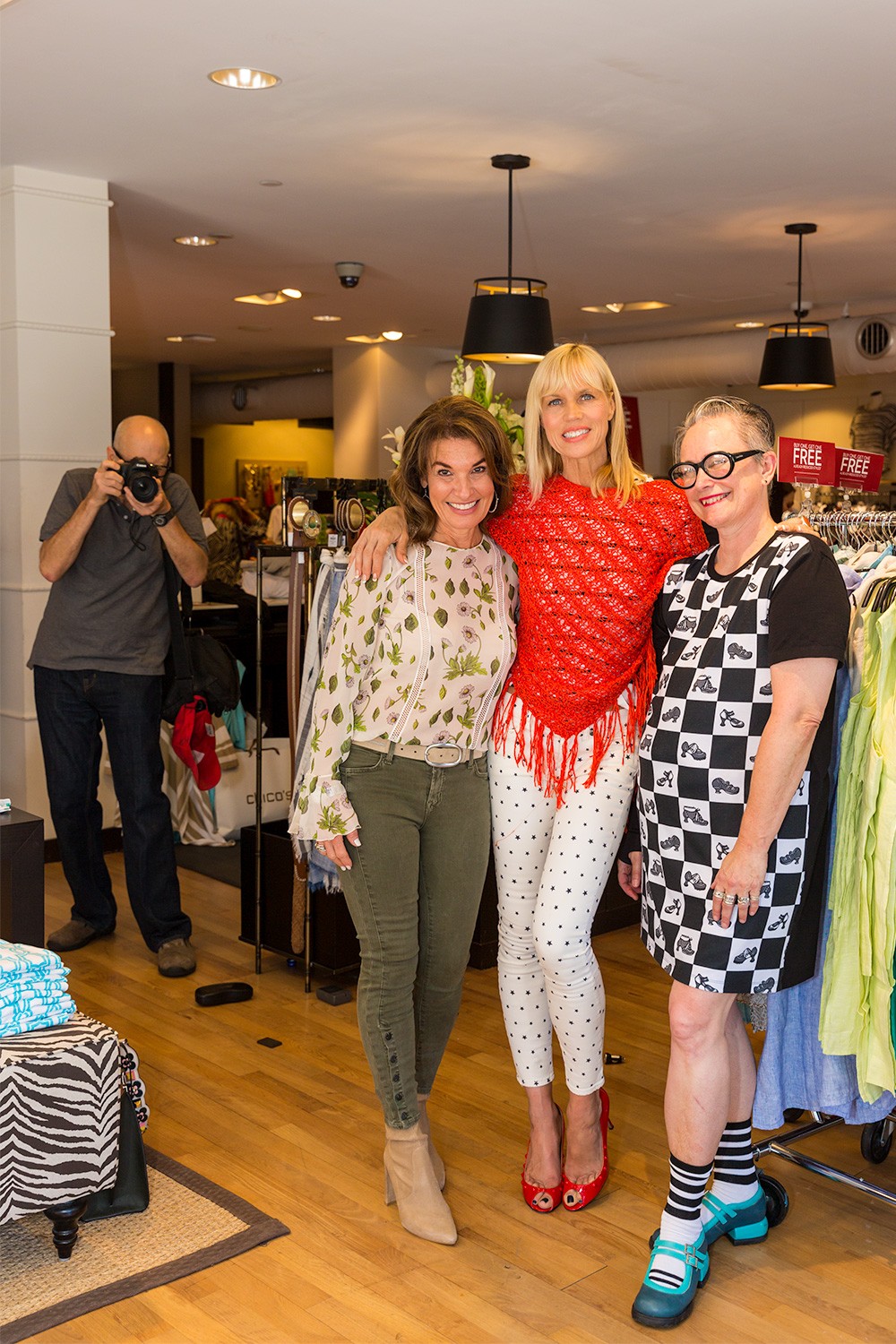 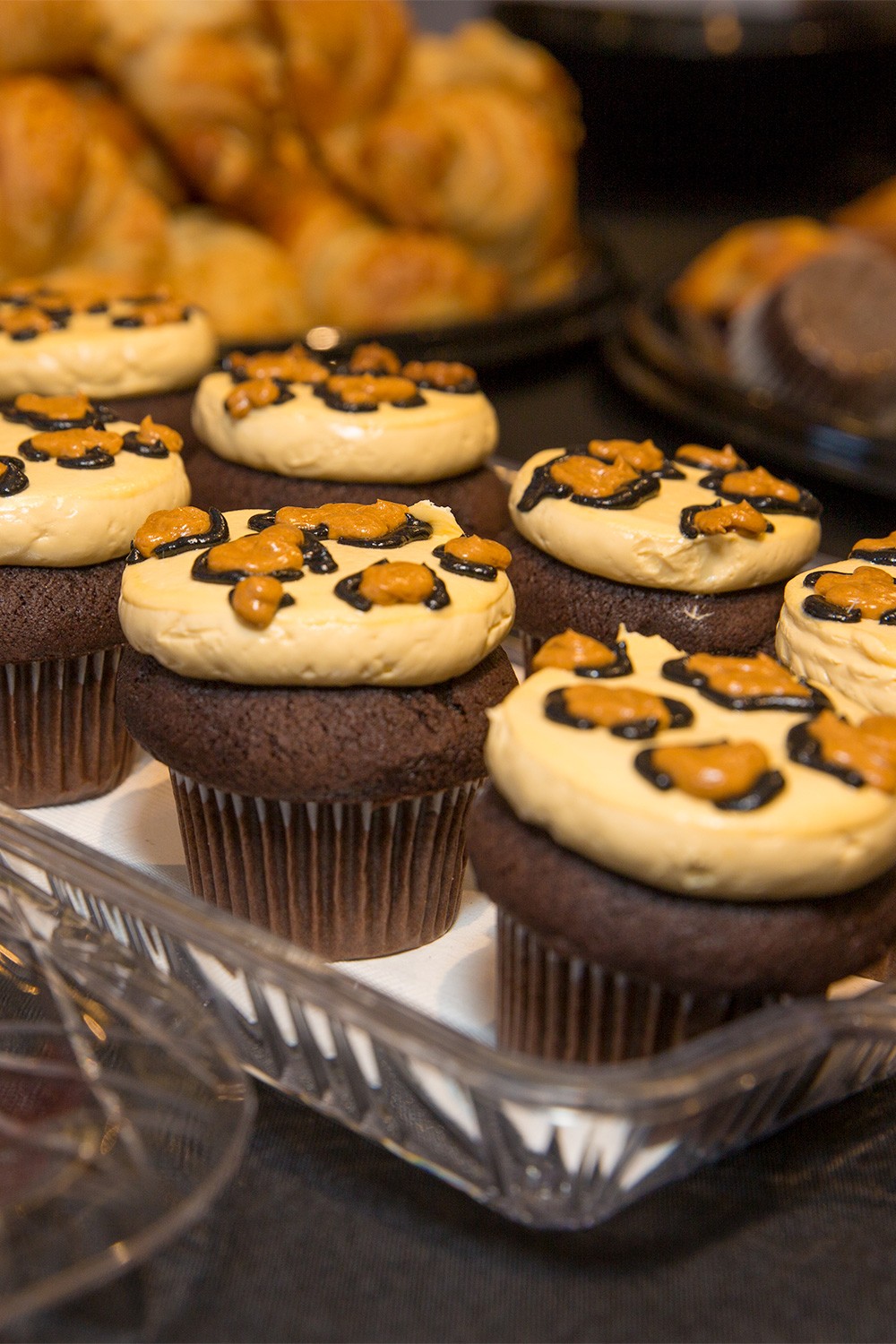 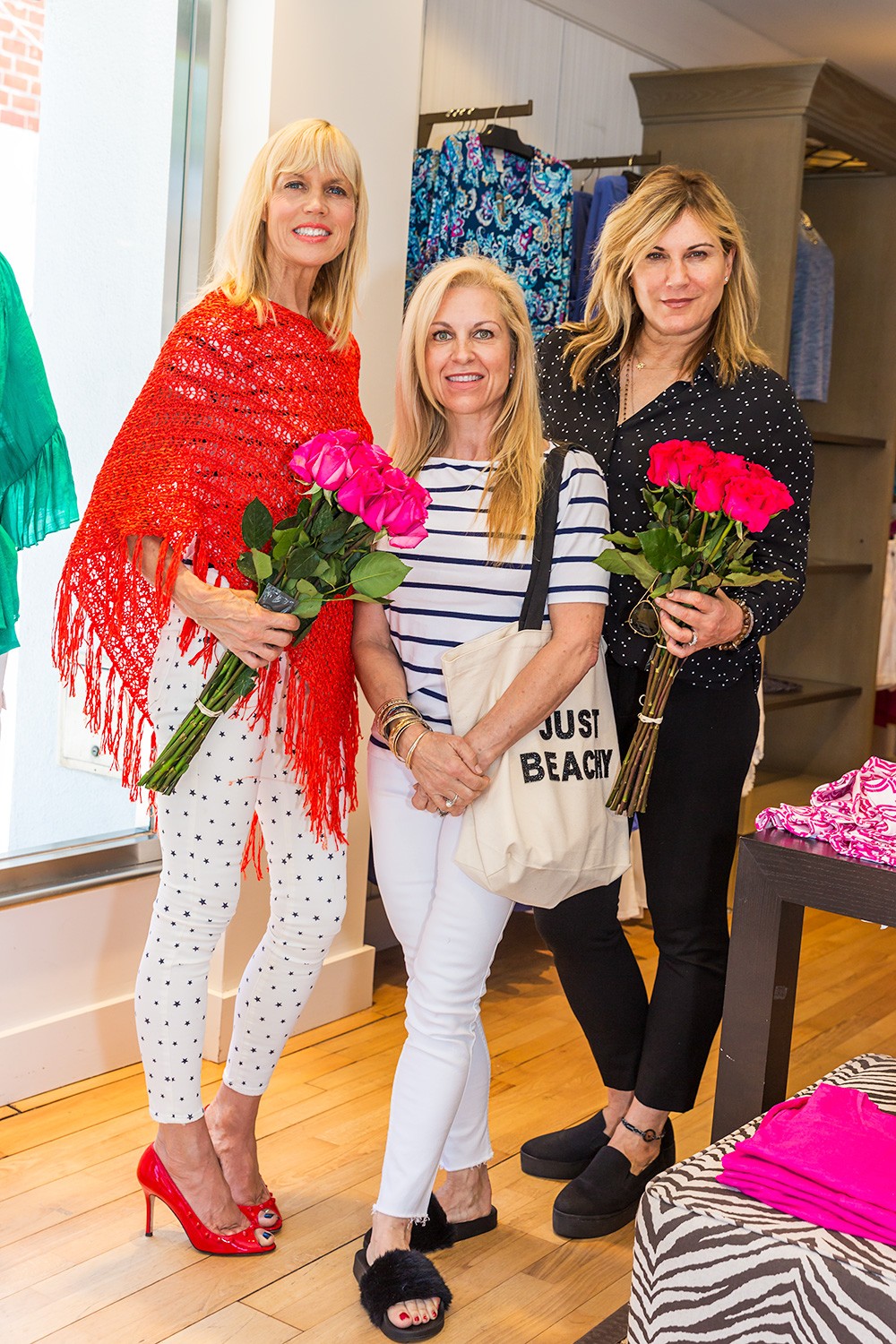 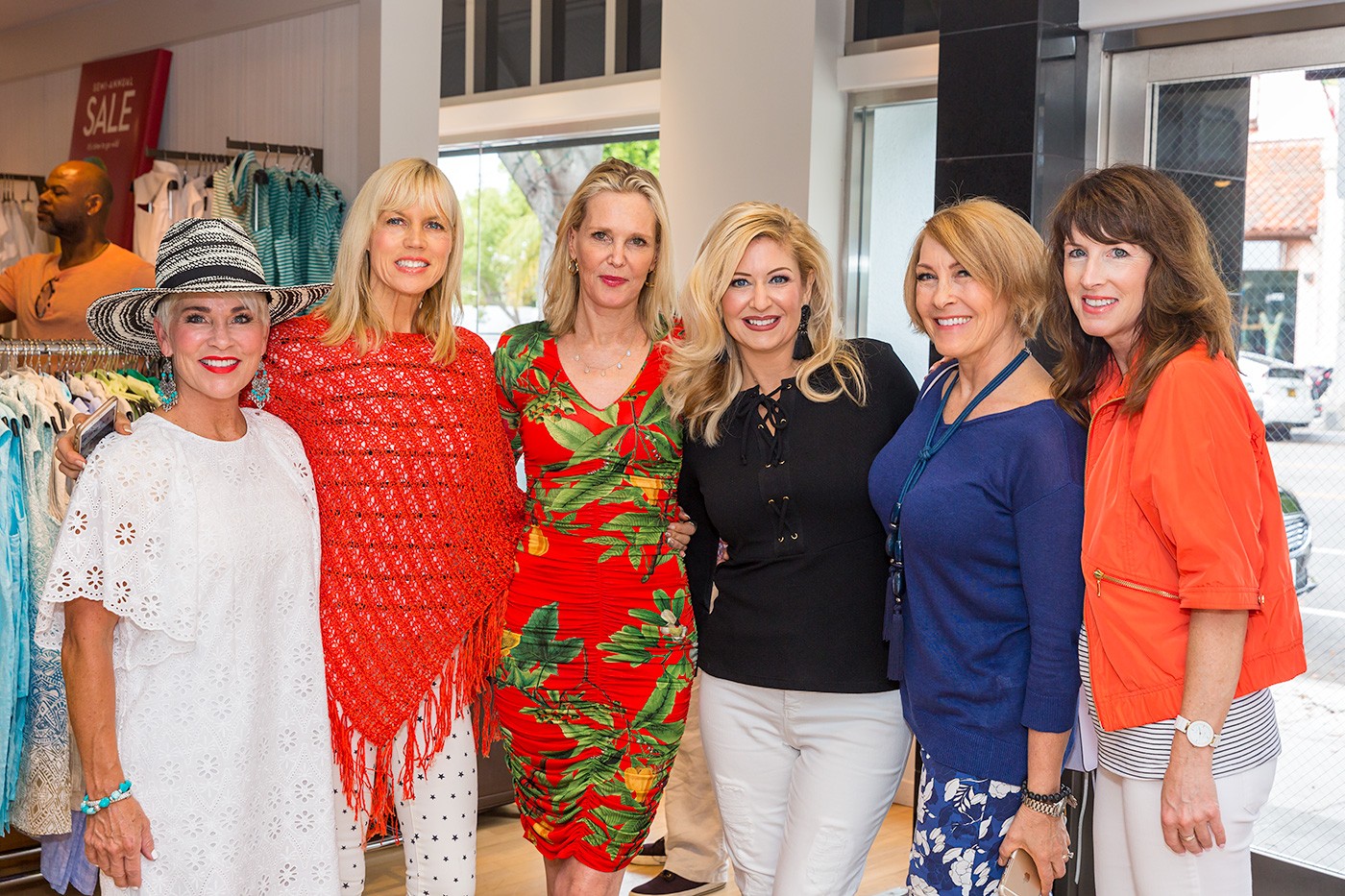 It was an action packed, whirlwind weekend that was capped off with an appearance by the lovely 80’s Supermodel, Nancy Donahue on The Cat & Kaehler Show. With her dear friend and fellow Supermodel, Kelly Emberg, joining her, it was a show to remember. Nancy spent the weekend endearing herself to the many women of The Fierce 50. She’s one empowered entrepreneur and has perfected the art of reinvention with her Bellecore Bodybuffer. As she demonstrates on video, Bellecore is brilliant to diminish crepey skin, to stimulate the flow of lymph and overall circulation. Post workout, it will soothe those muscles and assist in recovery. She’s a delight and now a dear friend. As we dove into a refreshing slice of key lime pie from Hermosa Pie and Cake, it was a perfect ending to a memorable weekend.

Here are the amazing bloggers who were part of the celebration! Their blogs are filled with inspiration for women of all ages:

The Fierce 50 Revolution has begun. Have you joined us yet? If not, send an email to info@catherinegraceo.com and tune into Cat & Kaehler and download the podcasts. 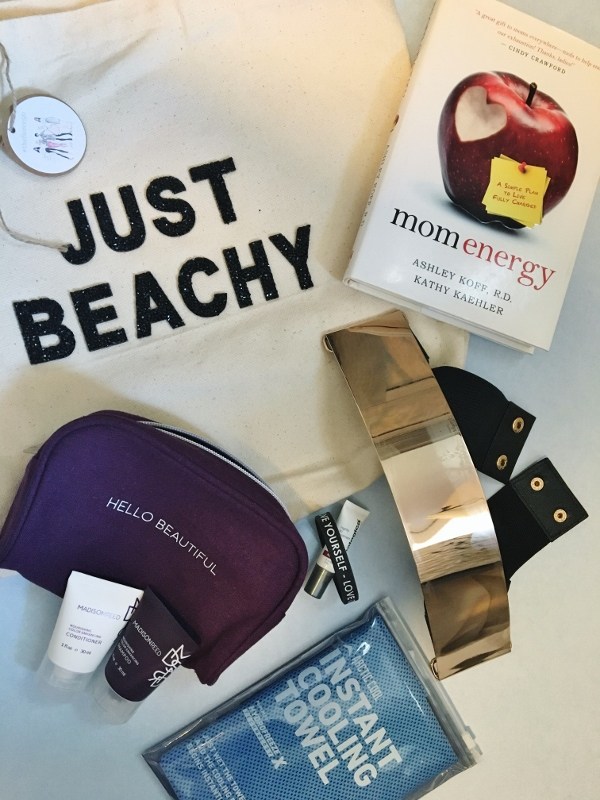 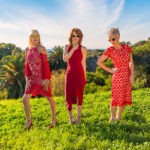 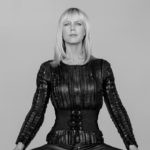 What an amazing weekend, I love all these photos! I hope to join next time, you all look so fabulous and you can see what an amazing time was had by all!
XO
Suzanne
http://www.AskSuzanneBell.com

You were missed! Can’t wait to meet your sparkly self one day in person!
Catherine

It was really nice meeting you in person Catherine and all the other wonderful ladies. Such a fun weekend!
Nora

You too…and looked like your trip was amazing!
Catherine

This looks like so much fun – next time I want to join too!!!

You were missed! Next time for sure…have you joined our FB group???
Catherine

So much fun! In EVERY photo, EVERY woman is beaming! We were all so thrilled to connect with each other, celebrating midlife, sisterhood and heart-to-heart friendships. I’m still basking in the afterglow.

FacebookTwitterInstagrampinterestBloglovinYoutubeLinkedin
Search
NEW POST: We Are Awake to Racism. We Must Never G