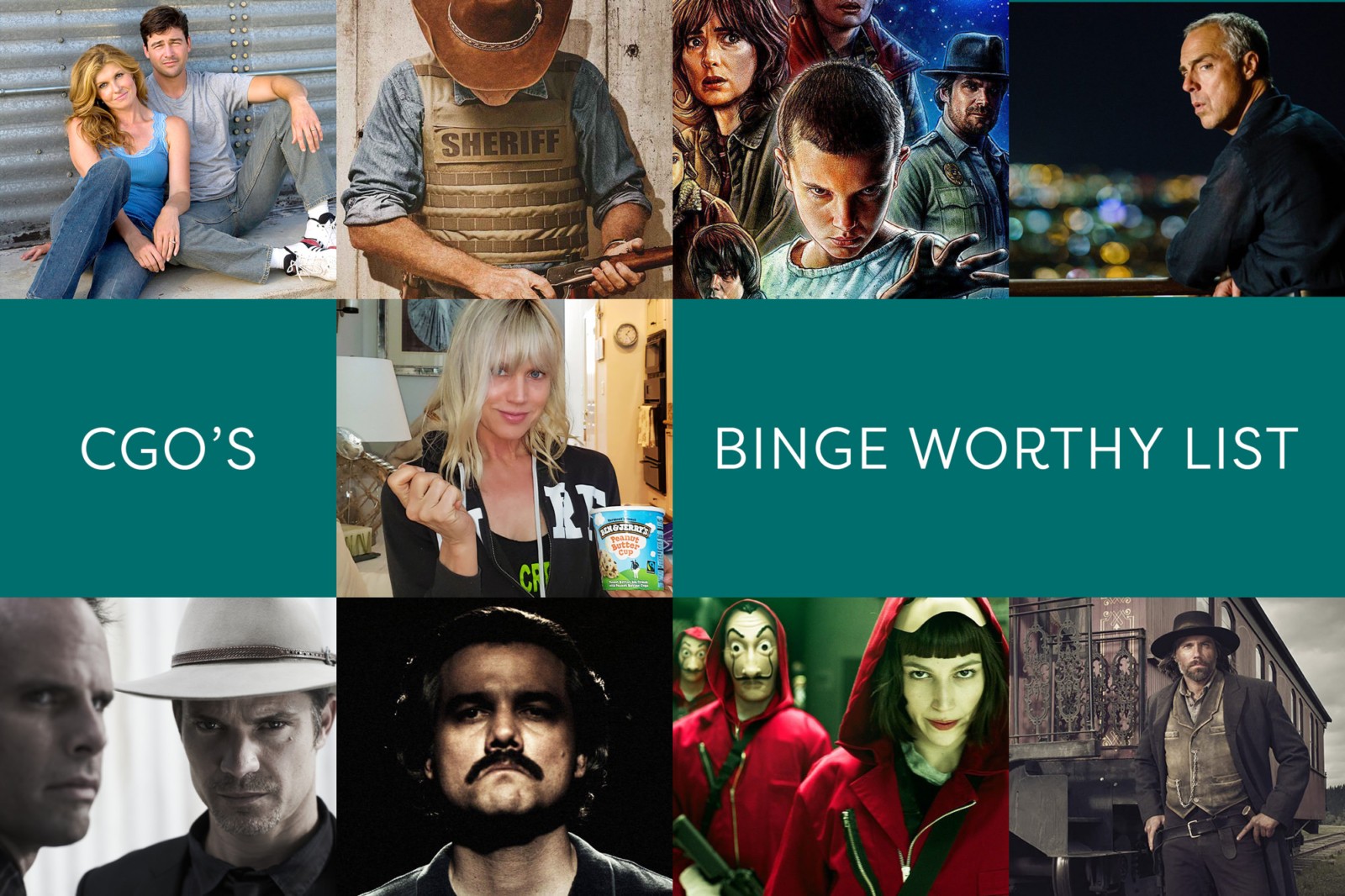 You are stranded on a deserted isle with an iPad and solar battery that will only hold 8 shows … WAIT! It doesn’t need to start like that anymore! COVID-19 has us locked down in our homes so let’s entertain ourselves with CGO’s Top Binge Worthy Shows!

I’ll let you in on a secret. I had this idea that there was something wrong with lounging on the sofa at night. Binge watching was the equivalent of the ultimate in laziness. I wasn’t big on letting myself be entertained – the guilt factor was too high. But I love stories! Luckily, I finally allowed myself to indulge in some amazing shows that were big on character development and so well scripted and acted that I never noticed time flying by. And now that the world is on pause, I thought I’d share these gems with you.

I’m actually shocked by what I’m finding to be my choices. I’ve definitely come a long way from my Brady Bunch days as most of the shows I’m watching are shows I have always said I would NEVER EVER watch – like bet you a million dollars NEVER EVER! I’ve had an aversion to any kind of violence, preferring fluffy Rom Coms over intense dramas. The shows I’m watching now – obsessively binge watching – are such powerful stories that I’m sucked right into the character development and story lines that I almost forget there’s any violence at all. They’re that good!

So, get ready to cozy up in your comfiest PJ’s, pour yourself a glass of Chardonnay, grab some Ben & Jerry’s and have at it, sisters! In order to make my list, a show had to have at least 4 seasons of outstanding content. Here’s my list of my Top Binge Worthy favorites on Netflix, Amazon Prime, and Hulu:

Cheers Beauties! Happy Binge-ing and let me know your reviews! 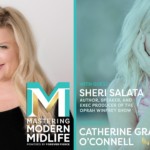 Sheri Salata – Be the Star of Your Own Life! 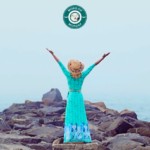 Second response just to let you know that Hubs and I have started watching Money Heist and it is everything you described it as and more! Yay – we have something to watch at night! Not being a tv person, it’s hard to find something he likes that also holds my interest. Done. Thanks again!

Hi Lori! Wonderful to hear from you again and thanks for your patience as I’ve definitely been slowing down in many ways. I’m so happy to hear that you and your husband love Money Heist! I found it to be absolutely brilliant in every way. Let me know if you love anything else you’re watching. I thought I wasn’t a tv person too. Now, I definitely am. Have a beautiful week! Catherine

I looked at Bosch several times and never hit play. Okay I’ll hit it tonight….. The money heist looks interesting, never seen it before. No western themed TV for me, I love the darker shows, Prodigal son, Blacklist, the first season of Killing Eve shows like Blind Spot. Queen of the South was a drug cartel show I liked for a while but couldn’t get into season 2 of stranger things…. Thanks for the tips:)

You’re going to love Money Heist sister! Best thing I’ve seen! And, Bosch is addictive. I developed a huge crush. I wasn’t big on “westerns” either but these are not your typical westerns. Keep me posted if you watch them!

Needed some viewing suggestions during this penned-in period. Thanks. Don’t trust Rotten Tomatoes that much for reliable feedback.

I’m so glad you did. Please let me know if you watch any of the shows. I would love your feedback!

Thanks for this list, Catherine! I’m adding Narcos and Friday Night Lights to my list right now! I’ve read a lot of the Bosch books by Michael Connelly, so I’m sure I would love that one, too!
I’ve been watching more series’ on Netflix and Hulu, as well. Just in case you get caught up on all yours and want to check out a few more, here are some to consider:
• Safe. Short series based on Harlan Coben’s book by the same name (one of my fav suspense authors). Netflix
• The Stranger. Also based on a Harlan Coben book. Netflix
• Little Fires Everywhere. Based on the book by Celeste Ng. Love the characters and the way they develop and how the actors from the past share so many of the same qualities, facial expressions and mannerisms as their current day personalities. Hulu
• Locke & Key. A really fun, and scary, story based on comic series. It has that “Series of Unfortunate Events” feel to it. It never gets too scary, though, which I feel is intentional for the audience it is geared toward, which is clearly teenagers. I enjoyed the concept and the house it is filmed in enough to make it worth watching all 10 episodes. Netflix
• Ozark. If you haven’t watched this yet, now is the time. Season 3 just came out and we are already finished watching it. I’m always hesitant to suggest it to friends who don’t live in MO and understand that this depiction of the Ozarks isn’t all together accurate. It is accurate in that life like this exists there, but the normal people/towns/communities aren’t depicted at all – making the stereotype even worse. However, it is a riveting show of deception, drugs, lies, all sorts of awful things, but you simply can’t tear yourself away! Netflix
• Schitt’s Creek. It took me 3 or 4 episodes to get into this, but once I did, I was hooked. It has 30 minute episodes of the most ridiculous story line I’ve ever watched. The Rose family loses everything and has to move to a podunk little town that the dad (Eugene Levy) bought for his son (Dan Levy – also his son in real life) called Schitt’s Creek. The characters are hilarious and the episodes are a great way to just have a good laugh. Surprisingly, there are good life lessons embedded in almost every episode.
• Frankie & Grace. (or is it Grace & Frankie). Jane Fonda and Lily Tomlin. All grown up and forced to live together when their husbands leave them for each other. Positively hilarious – especially for women our age.

Thank you sister for your recommendations. I tried Schitt’s Creek as I’ve heard it’s great. I have a hard time with silly humor. I was one of the few that didn’t like Bridesmaids. I will take another peek! I do love Frankie and Gracie. I’m more Frankie than Gracie!!! Ozark was a total binge watch. The last season was amazing! I didn’t include it as it only had 3 seasons. My daughter was in episode 3 of Little Fires Everywhere, the prom scene. I love Reese. I can’t wait to hear if you watch any of these. Would love your feedback!

I was very sad when they cancelled Longmire! Looking forward to checking out some of the shows on your list. The Marvelous Mrs Maisel is a great show too. Amazon Prime

Wasn’t it brilliant sister? I’m with you. I would have continued watching. I loved the first season of Mrs. Maisel. I’ll have to pick it up again!

We’re all really just children, wanting to be told a story, aren’t we? I keep saying I will start watching some good shows. Thanks for the list. Def not what I would expect and I haven’t heard of a lot of these, but some of these sound very interesting. Pass the Chardonnay please!

Cheers to that sister! Yes, we are really just children wanting to be told a story!

In the nick of time! I cannot thank you enough – this is perfect! I have only seen two of these – Hell on Wheels and Stranger Things. My hubbie and I have been struggling to find new shows that we would both enjoy, and now I have a list of 6! Thanks, sister!

Woot Woot!!! Can’t wait to hear your thoughts. I fell in love with Anson Mount! Oh and that darling young girl in Stranger Things. She was brilliant!!!